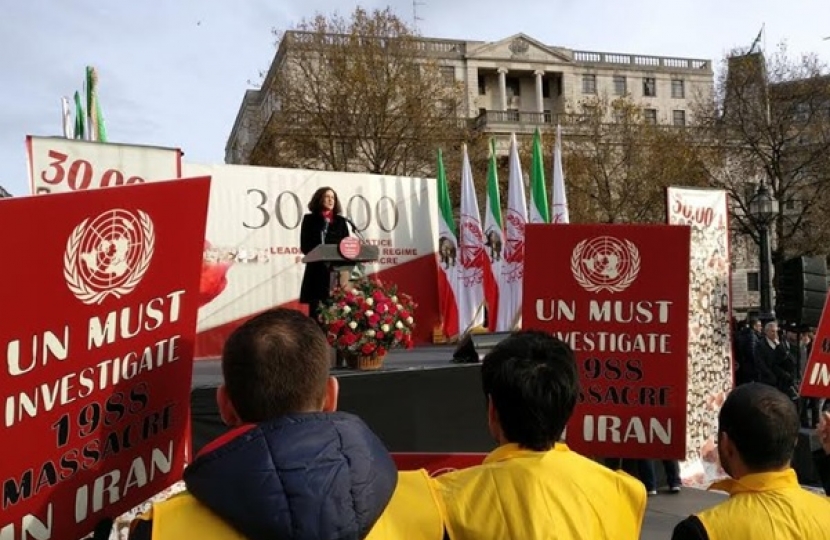 Barnet is one of the country’s most diverse boroughs, with residents from an immensely wide range of different cultural, religious, ethnic and national backgrounds. Theresa’s campaigning priorities reflect that diversity with a focus on a number of issues looking out to the wider world. Some of these include:

For 20 years, Theresa has been campaigning for justice for Cyprus and supporting efforts to reunify the island. She gained assurances from former Prime Minister May at PMQs that the UK Government would give its full support the talks between President Anastasiades and Mustapha Akinci to secure a negotiated settlement for a free and united Cyprus.

She has met four successive President of Cyprus. She has also had countless meetings with UK Europe Ministers and Foreign Secretaries to urge them to ensure the British Government takes every step it can to assist in efforts to reach a just, balanced and last settlement between the two sides in Cyprus.

May 2022: Villiers reiterates support for Cyprus as 48th anniversary of Turkish invasion approaches

November 2021: Villiers condemns flying of flag of unrecognised regime in north of Cyprus

October 2021: Villiers speaks up for Cyprus to new Foreign Secretary

July 2020: MPs mark 46th anniversary of the invasion of Cyprus

July 2019: 45th anniversary of the invasion of Cyprus: Theresa Villiers speaks out

February 2019: Theresa Villiers urges UK Government to support a settlement for a free and united Cyprus

July 2018: Theresa Villiers renews her support for a free and united Cyprus

July 2018: No direct flights to north of Cyprus: Grayling gives assurance to Villiers

May 2017: An 18 year track record of supporting freedom for Cyprus

February 2017: Villiers visits Cyprus to express support for efforts to reunify the island

January 2017: Europe Minister assures MPs that UK will take all steps to support a Cyprus solution

November 2016: Villiers brings Cyprus and Israel groups together in Parliament

October 2016: Hope for a reunited Cyprus: Villiers speaks up at Conservative Party Conference

Supporting the persecuted church around the world

Theresa is gravely concerned about the discrimination and violence faced by Christians in many countries around the world. For the past two years, Theresa has brought MPs together in Parliament to discuss the ‘World Watch List’ produced by the Open Doors charity: a list of 50 countries where Christians face persecution because of their faith. The 2017 report highlights the link between the increase in religious persecution and the global migrant crisis. She has continued to host the launch of the Open Doors report including an event this year.

January 2020: Villiers launches Open Doors report on attacks on Christians around the world

March 2017: Questions to the Church Commissioner on helping victims of famine in South Sudan

Campaigning for justice for Tamils in Sri Lanka

After her Tamil constituents came to see her to set out their concerns about war crimes committed during the military conflict in Sri Lanka, Theresa pledged to support their campaign for accountability for those responsible. She is working with the Tamil community to promote a negotiated settlement to deliver justice and political equality for Tamils in Sri Lanka. She helped set up the British Tamil Conservatives to encourage this minority community to get involved in politics and ensure their voice is heard. She was also one of the founder members of the All Party Parliamentary Group on Tamils when it was recently re-established.

Theresa also visit the UN Human Rights Council in Geneva to lobby the delegates there to ensure that the Government of Sri Lanka keeps the promises it signed up to restore human rights in the north and east of Sri Lanka and bring to justice those accused of war crimes during the conflict.

March 2020: Call for justice for Tamils at the UN Human Rights Council

May 2019: Statement on 10th anniversary of the Mullivaikal massacre

June 2015: Villiers supports the re-establishment of the All Party Parliamentary Group on Tamils

Standing up against human rights abuses in Iran

In the past, Theresa repeatedly raised concerns with the Iranian Government about a constituent who she believes was kidnapped and killed by the Iranian authorities.

She has also lobbied the Government on British citizens who have been imprisoned in Evin prison in Iran. She is urging Boris to press the Iranian authorities for the release of 77 year old Kamal Foroughi, held for over 5 and a half years and deprived of urgent cataracts surgery needed to avoid going blind; 37 year old Nazanin Zaghari-Ratcliffe, held since April 2016; 50 year old Roya Nobakht, held for over 3 years.

October 2021: MP calls for sanctions to be re-imposed on Iran

February 2017: Villiers speaks out on plight of women in Iran