Villiers speaks up for Cyprus to new Foreign Secretary 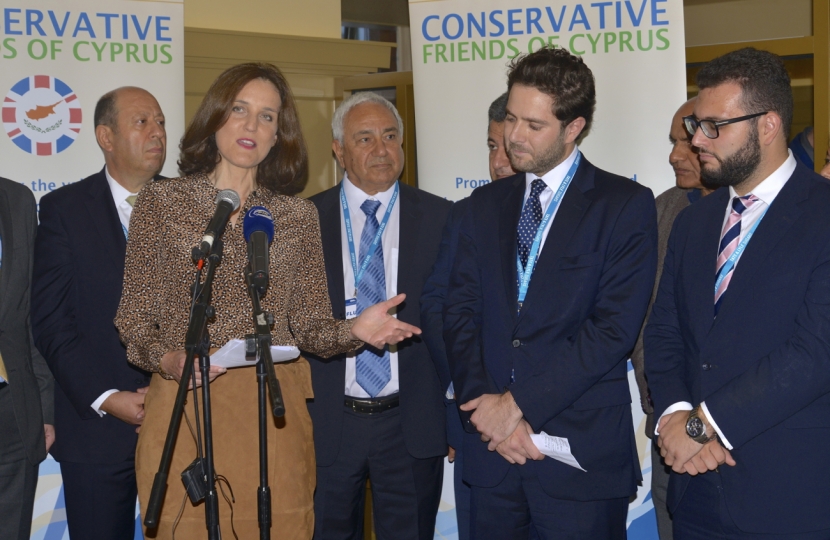 Theresa Villiers, MP for Chipping Barnet, has written to the newly appointed Foreign Secretary Liz Truss, to highlight the importance of freedom for Cyprus.

She forwarded on to Ms Truss, a letter written on behalf of the Board of British Cypriots by Elias Dinenis, Doros Partasides, Elissa Ellina, Stella Protopapa-Dinenis, and Antonis Savvides.

Ms Villiers urged the Foreign Secretary to take seriously the concerns expressed in the letter from the five British Cypriots. Briefing the media on her latest initiative on Cyprus, the MP for Barnet said:

“I want the new Foreign Secretary to understand how important Cyprus is to many of my constituents.”

“I am emphasizing how important it is that the principles for a settlement set out UN resolutions are respected. A fair solution in Cyprus must involve a bizonal, bicommunal federal state with a single citizenship and a single international personality. Any move towards partition would be completely unacceptable.”

“Just a week or two ago, Minister Wendy Morton attended reception I hosted at the Conservative Party Conference for Conservative Friends of Cyprus. She reiterated the UK Government’s support for the UN approach. So this marks a good start to Liz Truss’s tenure as Foreign Secretary.”

“I have highlighted to Secretary of State Truss that I and Conservative colleagues in Parliament are worried about Turkey’s activity in blocking a successful conclusion to the Crans Montana talks. We believe that Turkey’s insistence on retaining a military presence in Cyprus is the main stumbling block to a negotiated settlement. There should be no place for third country guarantees in a new settlement in Cyprus. We condemn Turkish incursion into the EEZ of the Republic of Cyprus and we condemn President Erdogan’s provocative decision to re-open the beachfront at Famagusta. We also demand that Turkey tells the truth about what happened to the Missing who are still unaccounted for after the horrors of the 1974 invasion.”

“Nicosia is Europe’s last divided capital. As a former colonial power, I hope the UK Government will continue to take very seriously its responsibility to give every support to Cypriots in their efforts to reach a just balanced and last solution to reunite their island.”