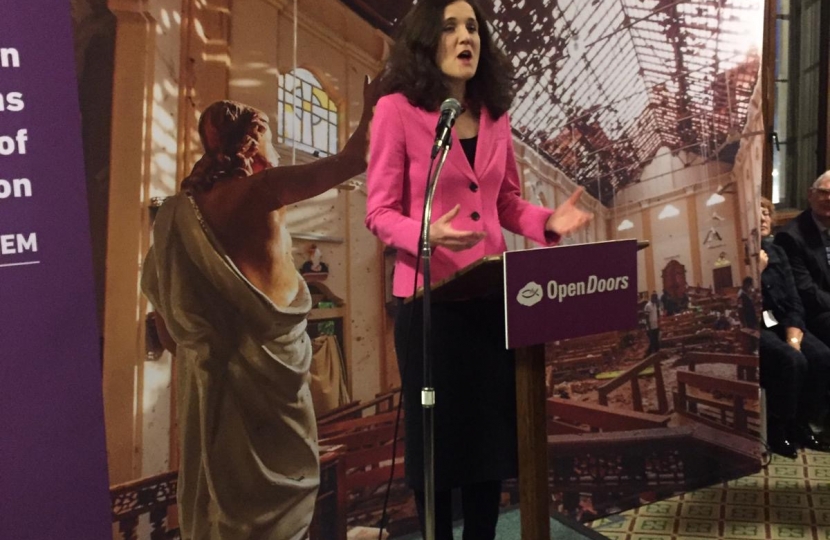 At the event in Parliament, nearly 100 MPs and Peers and peers were briefed on the findings of the report. Its conclusion is that in 2020, 260 million Christians live in the list’s top 50 countries where Christians are at risk of high, very high or extreme levels of persecution. This is up from 245 million in 2019.

The situation is also deteriorating in West Africa, particularly in northern Nigeria, the report from the charity Open Doors found.

However, despite the dangers, many people of faith are standing firm and strengthening communities against the odds.

In a speech at the launch, Theresa said: “The persecution faced by Christian communities in many parts of the world is severe.

“260m Christians live in countries in the Watch List top 50 where they face high or even extreme risks. That’s 260m people who have to take risks just to attend church.

“West Africa is listed as a particular concern with a deeply worrying increase in attacks in Burkina Fasso. The situation in northern Nigeria is also worsening.

“Many of my constituents have contacted me over the years setting out their grave concerns about this issue. I am pleased to have been able to show how seriously I take it by hosting this event in Parliament once again.”

The event heard from Christians who have been beacons in their communities, including Pastor Abdalla from war-torn Aleppo in Syria. He has turned his church into a centre of hope for his 600-strong congregation even though he wife and his children had the chance to leave the country to escape the war.

Henrietta Blyth, the CEO of Open Doors, also appealed for the Department of International Development to include more faith based organisations in their aid programmes.

The meeting was addressed by the Prime Minister’s Special Envoy on Freedom of Religion and Belief, Rehman Chisti MP, who emphasised that the Government takes this issue very seriously and was already implementing the recommendations of a recent report on this issue by the Bishop of Truro.

At the end of the launch, parliamentarians were asked to write to the Foreign Secretary, the Secretary of State for International Development and the Prime Minister to highlight the key findings of the report.