Campaign for freedom for Famagusta continues 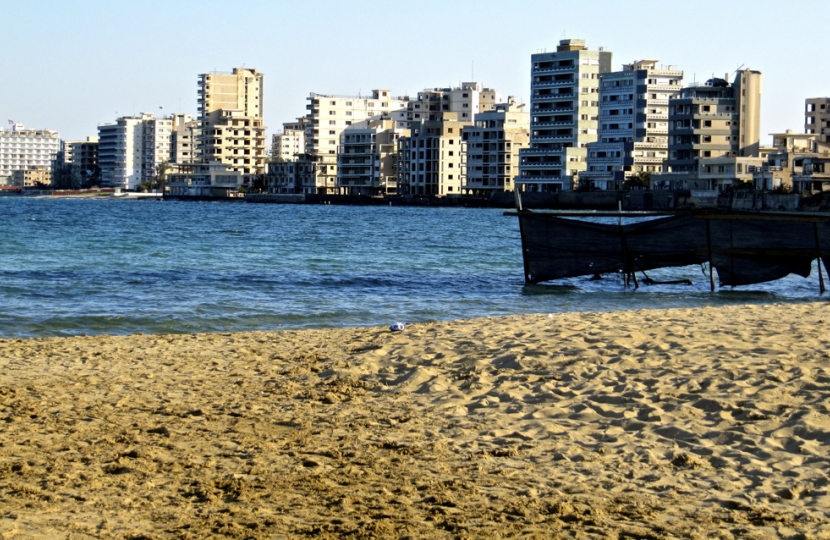 Theresa Villiers, MP for Chipping Barnet, has pledged her continuing commitment to Famagusta and its displaced residents, following a meeting with a delegation from the British Cypriot community.

Her drop-in surgery in March (the last to take place before the Covid shut-down was announced) was attended by Antonis Savides, Nikos Savides, Spyros Neophytou and Doros Partasides. Antonis, Nikkos and Spyros all come from Famagusta (also called Varosha) and are among thousands of Cypriots unable to return to their homes in the city which has been part of the Turkish-occupied area of Cyprus since the 1974 invasion.

Following that meeting at her constituency office in Barnet High Street, Theresa contacted the Foreign Secretary, Dominic Raab, to inform him of the huge concern felt about plans by the Turkish authorities to open up Famagusta to redevelopment, meaning land owned by exiled Greek Cypriots would be built over. Theresa was shown photos of a hotel that has already been constructed on Greek Cypriot owned land on the coast very near to Famagusta.

The Chipping Barnet MP recently received a response from new Minister for Europe, Wendy Morton, which reiterated the position of the UK Government that attempts to settle any part of Varosha are contrary to longstanding UN resolutions. In her first statement on Cyprus since her appointment, Ms Morton also confirmed that the UK Government continues to be “a strong supporter of a comprehensive, just and lasting settlement of the Cyprus issue”.

Reflecting on the Europe Minister’s letter, Theresa Villiers said, “The continued occupation of Famagusta by Turkey is deeply unjust and contrary to a long series of UN resolutions. It is tragic that so many Greek Cypriots were driven from their homes in Famagusta and that over 40 years later, they still have not been able to reclaim them.”

“It is unacceptable that this situation has persisted for so long. It is shocking that the Turkish authorities propose to make the situation even worse by giving the green light to building over land which is owned by refugees who were forced out of Famagusta in 1974”.

“This course of action proposed by Ankara will harm the prospects for an agreed settlement if they press ahead. The UN and the international community need to make it very clear to Turkey that what they are planning is unacceptable. That is why I raised this with the UK Foreign Secretary. I welcome the assurance from the Europe Minister that the UK Government fully supports UN resolutions which call for Varosha to be released from Turkish control.”

“I thank Nikos, Antonis, Spyros and Doros for alerting me to what is happening in Famagusta. I will continue to campaign for freedom for Famagusta to bring an end to 46 years of injustice for the Cypriots who used to live there.”

“Right now, of course we are all focused on Covid-19. I encourage everyone to comply with the rules on social distancing and stay at home to protect the NHS. But I want people to know that their MPs are still working hard on their behalf, even though we have to do it from home, not in Parliament. So I am continuing to respond to my constituents’ concerns and to highlight issues that they care about. That includes championing the Cyprus cause and the plight of Famagusta.”

“I send my best wishes to all my constituents at this very difficult time for our whole country. The death toll is heart-breaking, and the lockdown has placed frustrating limits on everyone’s daily life. But we have some of the best scientists, doctors and nurses in the world and they are working with incredible dedication to tackle this cruel disease. Although we need to keep apart from one another physically, that will not stop us coming together in a national effort to minimise loss of life and protect the elderly and vulnerable. We will get through this.”