An 18 year track record of supporting freedom for Cyprus 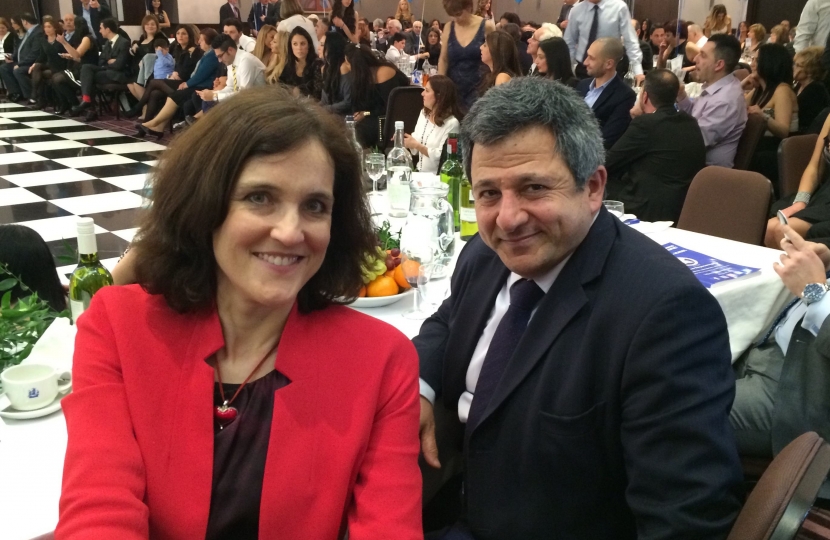 Theresa Villiers, the Conservative Parliamentary Candidate for Chipping Barnet has had a longstanding interest in matters related to Cyprus, taking up the concerns of British Cypriots living in the constituency. The photo shows Theresa with the President of the World Federation of Cypriots, Andreas Papaevripides, at an event to support a local Greek school. She has published the following article on some of her many campaigns on Cyprus matters stretching back over nearly two decades...

"For over 18 years I have been campaigning for freedom for Cyprus. I first became involved in the Cyprus cause back in 1998 when I was standing for election to the European Parliament, and ever since I have been supporting efforts to reach a negotiated settlement to reunite Cyprus.

I have attended countless Cypriot community events, including every Trafalgar Square rally since 1999. I continued to attend the rally even when I was a member of the Cabinet, which is unprecedented for a senior government figure. I have visited Cyprus on many occasions over the years for important occasions such as the rally for Morphou, Barnet’s twin town. I have often received support from British Cypriots from across different political parties who recognise that other candidates cannot match my track record of commitment on Cyprus.

I have had the privilege of meeting each one of the last four Presidents of Cyprus: Glafcos Clerides, Tassos Papadopoulos, Demetris Christofias and Nicos Anastasiades. In each case, I have pledged my continuing support for Cyprus.

I believe it is a grave injustice that Cyprus has been divided since the 1974 invasion, with thousands of people forced from their homes and unable to return to them for over four decades. I strongly support efforts to reach a negotiated settlement which will see all Cypriots reunited and living together again in one country with a single sovereignty, a single legal personality, and a single citizenship.

Achieving a just, lasting and workable settlement would benefit all Cypriots. This is not a zero sum game. I warmly welcome the work that has been done by President Anastasiades and Mr Akinci in the current round of negotiations. Both have a long track record of trying to bring Cypriots together and I wish them well in their continuing efforts to deliver a solution. I have repeatedly called on Ankara to allow Cypriots the freedom to decide their own future.

I visited Cyprus in February as part of a parliamentary delegation for an update on the crucial talks which have been taking place between the two sides. I took part in a series of high level meetings with leading political figures, including President Anastasiades and his chief negotiator. Following on from those meetings, I stated in Parliament that there should be no place for third country guarantees in a new settlement for Cyprus. These are not justified in the modern era and Cypriots should not have to give other countries a right of military intervention. I also very much hope that an eventual settlement will seek to address the concerns of refugees displaced from their homes since they have suffered so directly as a result of the years of division in Cyprus.

Over the last 18 years, I have been involved in many different campaigns in support of Cyprus and British Cypriots living in Barnet. I am President of the organisation, Conservative Friends of Cyprus which does important work to highlight the Cyprus issue in the UK.

I have met with relatives of the Missing and their representatives on many occasions. It is desperately sad that these families still do not know with certainty what happened to their loved ones. I welcome the work that has been done in recent years to locate the remains of a number of the Missing in in Cyprus. I strongly support the Committee on Missing Persons (CMP) which is conducting detailed research to try to identify the remains of the Missing and provide answers to their families. I welcome the funding which the Conservative Government has contributed towards this research. I believe it is very important for the CMP to be allowed access to whatever sites they need to visit, including those under the direct control of the Turkish military.

When I was an MEP from 1999 to 2005, I helped resolve a number of issues around Cyprus’ accession to the EU. I also hosted events to inform MEPs from around Europe about Cyprus and the need for change.

I repeatedly called on Turkey to comply with the Ankara protocol and to recognise the Government of Cyprus and admit Cypriot shipping to its ports. In April 2002, I invited a cross-party delegation of leading members of the British Cypriot community to a series of top level meetings in Brussels, including a discussion with Gunter Verheugen who was Commissioner for Enlargement at the time.

This is just one of many occasions when I have worked to give British Cypriots the opportunity to meet leading figures in politics and put their questions to them. This has included setting up meetings with William Hague, Philip Hammond and Boris Johnson.

I have also repeatedly urged people not to buy property in the northern part of Cyprus which may have been confiscated from its owners. I have had the privilege of meeting Mrs Titina Loizidou who took this issue all the way to the European Court of Human Rights and won her case in a landmark judgment.

In 2010, I was very critical of Labour former Foreign Secretary, Jack Straw, when he called for partition of Cyprus to be considered.

I have spoken out in defence of enclaved communities in Cyprus such as Rizokarpasso, when their schools and their rights were threatened. I also deeply regret the neglect and deterioration of historic churches in the northern part of Cyprus and the threat to the cultural heritage of the island which this represents.

I supported the application to set up the UK’s first ever Greek Orthodox secondary school, St Andrew the Apostle. This has now been established in Brunswick Park in the Chipping Barnet constituency under the Conservative Government’s free schools programme. It has been rated by Ofsted as ‘Outstanding’.

I have backed local Greek schools, helping them resolve issues with their accommodation, and supporting their events.

Two years ago, when I heard that there was a plan to scrap the A Levels in Modern Greek and other minority languages, such as Hebrew, I was very concerned that losing these exams would threaten the continued viability of Greek schools in London and other supplementary schools. I immediately went into action to save these qualifications. I lobbied the Government and took representatives from north London Greek Schools to meet Education Minister, Nick Gibb. We made the case to him for keeping Greek A Level and the Government responded by lifting the threat of abolition.

Campaigning for justice for Cyprus has been one of the defining issues of my time in public life. I do not believe that any other candidate standing in the election can come close to matching my commitment to Cyprus and the Cypriot community. It is a tragedy that the painful division of Cyprus persists. If I am re-elected as MP for Chipping Barnet, I will continue to strive to bring this division to an end so that Cypriots can be reunited once again."