MPs mark 46th anniversary of the invasion of Cyprus 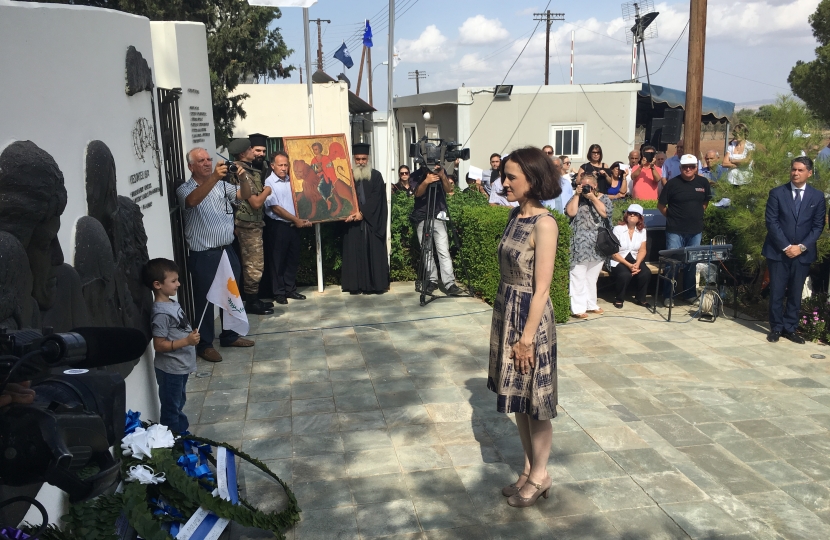 Addressing the annual lobby of Parliament to mark the 46th anniversary of the invasion of Cyprus and also 60 years since the creation of the Republic of Cyprus, Theresa Villiers, MP for Chipping Barnet, joined other MPs in calling for a free and united Cyprus. The guests of honour were the Foreign Minister for Cyprus, Nikos Christodoulides and UK Foreign Office Minister, Wendy Morton. In her speech to this event, held virtually for the first time ever in order to comply with social distancing rules, Ms Villiers said:

"I’ve been supporting lobby events like this for Cyprus for many years and it’s a privilege to be able to speak alongside Minister Nikos Christodoulides this evening. I will continue to campaign for freedom for Cyprus and I will also advocate enthusiastically for close and cordial relations between the UK and Cyprus.

I welcome the chance today to celebrate some of the achievements of the Republic of Cyprus over the past 60 years and to look ahead at the future of the island.

Huge strides forward have been made by the Republic of Cyprus since 1960. It is a beacon of stability in an unstable region. Big improvements in prosperity have been achieved in the six decades since independence.

Re-uniting the island will of course deliver a further economic dividend. This would be felt especially strongly in the part of Cyprus which is current occupied.

And I want to take this opportunity to strongly condemn statements indicating that the Turkish authorities are giving the green light to development in and around Famagusta. I was shocked to hear about this from my constituents, Nikos and Antonis Savvides, who were among those forced to flee from their homes in 1974. It would be totally unacceptable for building to take place on land owned by exiled Greek Cypriots.

I also condemn the continued incursion by Turkey into the Cyprus Exclusive Economic Zone. The EEZ is recognised throughout the world under accepted principles of the UN Convention on the Law of the Sea. This is unacceptable behaviour by Turkey and the UK Government has repeatedly stated that it should not be taking place.

I was also saddened to hear of a further decision in Ankara calculated to divide rather than unite. That is the plan to turn Hagia Sophia into a mosque. This stunning cathedral is one of the greatest monuments every created by the Eastern Roman Empire. It has stood for nearly one and half thousand years. In this country we barely have a wall standing which is that old. I appreciate the cultural and spiritual significance of Hagia Sophia for many Orthodox Christians and I sincerely hope the widespread opposition to Mr Erdogan’s plan will see the decision overturned.

I want to conclude by sending my best wishes to Cypriots in this 60th anniversary year. I wish them well with their recovery from the Covid epidemic and the Covid economic recession.

The Covid lockdown has created one of the most severe global recessions since records began. Times will be hard. But that should not halt efforts to secure a settlement. I welcome the commitment of President Anastasiades to resuming negotiations and I sincerely hope that one day soon we will see real progress towards agreement and an end of 46 years of hurt and division."