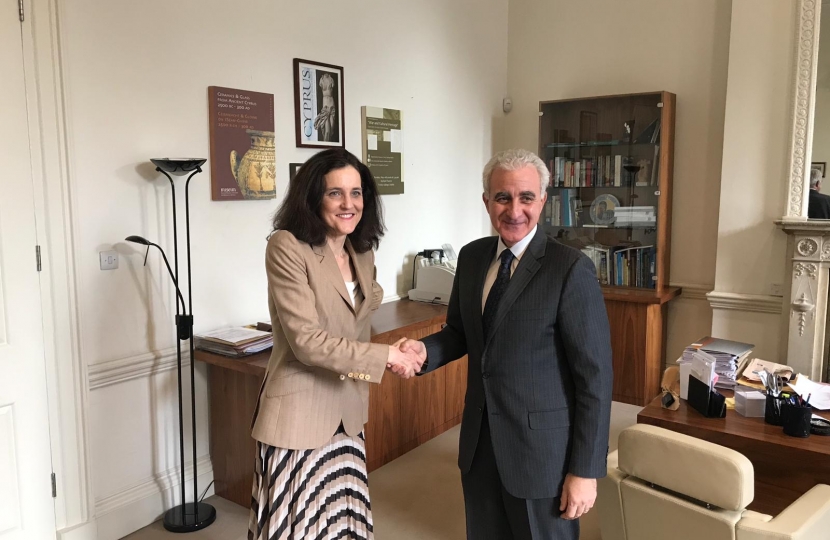 Theresa Villiers, the Conservative candidate has received a briefing from the Cyprus High Commissioner to the UK, His Excellency Mr Andreas Kakouris. The meeting took place at the Cyprus High Commission in St James’s Square and focused on the efforts being made to begin negotiations again after the Crans Montana process ended without an agreement.

Speaking after the meeting, Ms Villiers said “It is tragic that 45 years after the Turkish invasion, Cyprus remains a divided country with a divided capital. I strongly believe that reaching a negotiated settlement to reunite the island is in the interests of all Cypriots. I have spoken out many times on this issue during my time representing Barnet in Parliament. I appreciate how important the Cyprus question is to many of my British Cypriot constituents and I have raised it with three successive Prime Ministers – David Cameron, Theresa May and Boris Johnson.”

“I very much welcomed the chance to meet His Excellency the High Commissioner to hear the latest on the efforts being made to bring the two sides in Cyprus together. I was really pleased to learn that the head of the UN Antonio Guterres is due to meet President Anastasiades and Mr Akinci in Berlin this week. I very much hope that these discussions will lead to a resumption of negotiations for a settlement.”

“I applaud the efforts being made by President Anastasiades to make progress and re-start formal talks. I believe it is important for the UN to support and facilitate this.”

“I also want to use this opportunity to re-state my commitment to freedom for Cyprus. If I am re-elected as an MP I will continue to campaign for a just, lasting and balanced settlement in Cyprus to reunite the island and allow all Cypriots to live together once more. No other candidate can come close to matching my commitment to Cyprus.”

United Nations chief Antonio Guterres is expected to host a dinner this evening attended by President Nicos Anastasiades and Turkish Cypriot leader, Mustafa Akinci, to discuss the next steps towards a potential resumption of formal talks between the two sides.