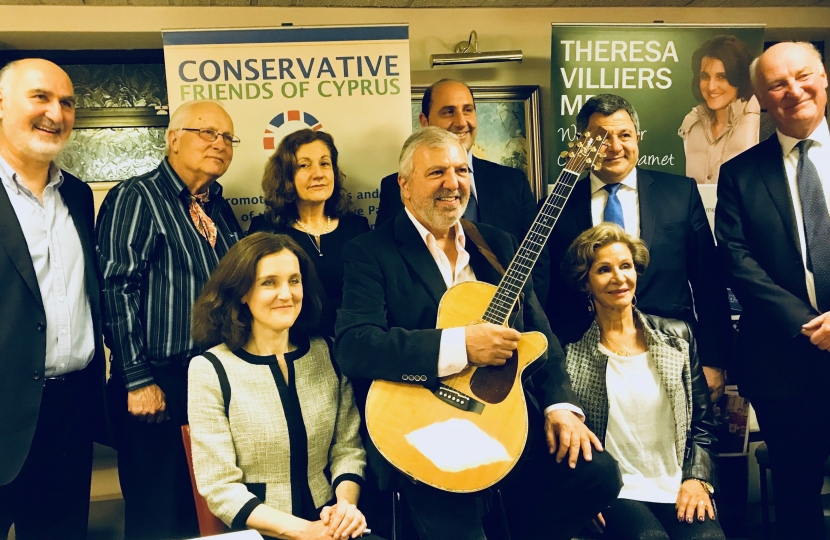 Members of the Cypriot community in north London gathered together in Barnet on Friday to celebrate Theresa Villiers MP’s 20 years of campaigning for Cyprus.

Chipping Barnet MP, Theresa Villiers, first took up the Cyprus cause after she was selected as MEP candidate for the Conservatives in 1998. Dr Ian Twinn was also on that 1998 Conservative list of candidates and he introduced Theresa to leading figures of the Cypriot community. These included Doros Partasides, Andreas Tambourides, Andreas Papaevripides, Tony Yerolemou and others involved in Conservatives for Cyprus (now Conservative Friends of Cyprus). Theresa has been working with them for freedom for Cyprus ever since.

The packed event took place in the office of the Chipping Barnet Conservatives in High Barnet. In addressing the gathering, Theresa reflected on some of the campaigns and initiatives she has taken part in during her two decades of supporting the Cyprus cause.

She spoke of her work as MEP for London to see Cyprus admitted as a member of the EU, including the hugely successful visit she organised for the Federation of Cypriots to Brussels to meet key decision-makers. She recalled speaking out against controversial comments made by Jack Straw and Tony Blair on Cyprus when they were in Government.

Theresa referred to the problems faced by enclaved communities in Cyprus such as Rizokarpasso, a matter which she raised in the European Parliament when she was a member. And she expressed her sadness and regret that after 20 years of campaigning, it was still the case that many Cypriots were exiled from their homes and unable to return. She recalled her visits to Cyprus for the annual rally for Morphou – Barnet’s twin town - and expressed her sympathy and support for all the exiled municipalities.

Theresa also highlighted her support of Greek supplementary schools in her constituency, helping them out on various concerns and problems over the years, including her successful campaign to save Greek A Level from abolition. Scrapping this A Level could have led to the closure of many Greek schools.

She spoke of the hundreds of Cypriot community events she had attended over the years, including the Trafalgar Square Rally. Theresa is the only person to have attended the rally while a serving Cabinet Member.

She reminded the audience that she had raised Cyprus matters many times in the European Parliament, at the Cabinet table, and in the House of Commons, including at Prime Minister’s Question Time. She emphasised the importance of keeping the issue on the political agenda in the UK.

She concluded by expressing hope that negotiations between the two sides would start again soon.

Doros Partasides in his opening remarks to the gathering said “If I had to write down all the activities that Theresa has done for Cyprus, the list would stretch from London to Nicosia.” He also ephasised that during her term in office as a cabinet member, Theresa helped establish of closer links between the Republic of Cyprus and the UK government.

Speaking after the event, Theresa said “It has been my honour to support my Cypriot constituents during two decades of campaigning for freedom for Cyprus. The division of Cyprus is a grave injustice. It saddens me that Nicosia remains Europe’s last divided capital and I will continue to campaign for a free and united Cyprus.”

“The Crans Montana talks foundered over security, guarantees and troops. These were always going to be the most difficult issues, but I very much hope that an agreed settlement can be reached which ensures the departure of foreign troops and an end to third country guarantees.”

“I have had the honour to meet the current and three previous Presidents of Cyprus, all of whom worked diligently for a settlement. President Anastasiades has set a brave course in his approach, pushing hard for a negotiated agreement to bring Cyprus back together. I wish him well and also send my best wishes to all Cypriots working for reconciliation and unity in Cyprus.”

“I am deeply grateful to the Cypriot community for all the support and friendship which they have given me over the years and I thank Doros Partasides for hosting this evening’s celebration of the 20th anniversary of my first involvement in Cypriot matters.”

Friday’s celebration was hosted by photographer and journalist, Doros Partasides.