45th anniversary of the invasion of Cyprus: Theresa Villiers speaks out 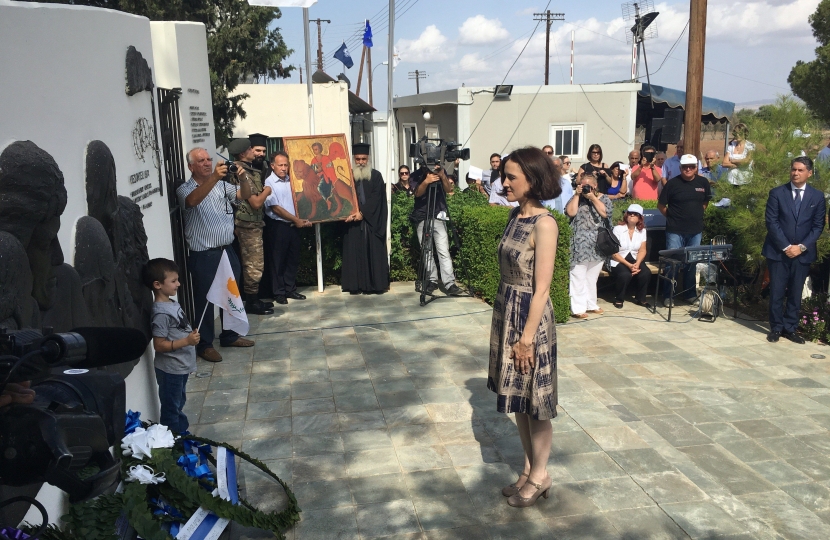 As we approach the 45th anniversary of the Turkish invasion of Cyprus, the Rt Hon Theresa Villiers, MP for Chipping Barnet, has spoken of her sympathy and concern for all those who have suffered as a result of the 1974 conflict.

In a statement issued to mark the anniversary, Theresa said “The continuing division of the island of Cyprus is a tragedy. The 1974 invasion was grave injustice which led to lost lives and lost homes. This 45th anniversary is an important time to express sympathy and solidarity with those who were bereaved or injured by the invasion, and also to those who were forced to flee their homes and have never been allowed to return.”

“For 20 years I have been campaigning for a free and united Cyprus. Negotiations between the two sides have never been a zero sum game. There will be great benefits for all Cypriots if a lasting settlement can be achieved.”

“I do not believe third country guarantees are an acceptable part of such an agreement. I have made this point in Parliament. The Republic of Cyprus is a modern European democracy, with full respect for human rights laws. It is a beacon of stability in a Mediterranean region fraught with conflict. There can be no justification in giving third countries the right to invade. Guarantees should be consigned to the past where they belong.”

“Cypriots should be given the freedom to determine their own future and so I want the day to come when we finally see the withdrawal of Turkish troops from the island. I will always try to keep Cyprus on the UK political agenda and I have urged UK Ministers many times to raise this question with Ankara.”

“I know that my Conservative colleagues in Government are strongly supportive of efforts to reach a solution in Cyprus. The Conservatives are also clear that the Republic of Cyprus has the right to control and exploit natural resources in its Exclusive Economic Zone. I have spoken out in Parliament to condemn the recent unlawful incursion by Turkish ships.”

“I have many constituents with Cypriot heritage who were directly affected by the invasion or who have family members who were. They have my support and sympathy. I will continue to fight for their interests and push for a settlement to bring all Cypriots together once again in a united island.”