Call for justice for Tamils at the UN Human Rights Council 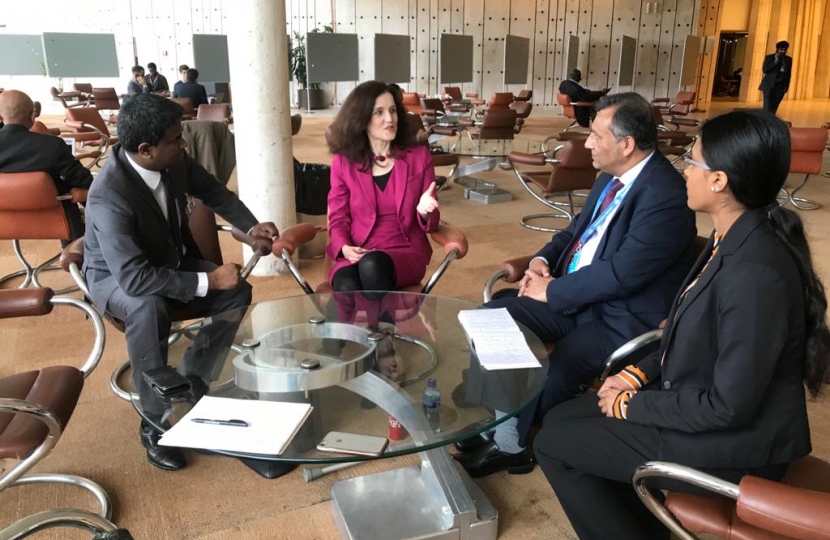 Theresa Villiers is a longstanding campaigner for human rights and justice for the Tamil people in the north and east of Sri Lanka. After returning from a visit to the UN Human Rights Council in Geneva on Thursday, she has posted the following blog on the day she spent at the UN and the reasons why she went ahead with the trip, despite the Coronavirus outbreak:

"Pressing ahead with this longstanding commitment was not an easy decision to make but I felt I should keep my promise to attend, despite the Coronavirus situation.

That is because I have British Tamil constituents who wanted me to be there to talk to the national delegations there about the importance of human rights in Sri Lanka. Thursday was the last day of discussions, as the HRC decided to shut down its meetings early.

In 2015, David Cameron's Government helped secure a crucial resolution in the Human Rights Council, 30/1, in which the Sri Lankan Government promised to bring to justice people responsible for war crimes committed during the conflict which ended in 2009.

It is deeply worrying that no progress has been made on accountability for war crimes and the Government of Mr Rajapaksa is now trying to withdraw from resolution 30/1 altogether. The longer the period before investigations take place, the more difficult it is to mount successful prosecutions. So eleven years on from the civil war, it is increasingly urgent that there is an effective process in place to secure justice for the Tamils living in the north and east of Sri Lanka. We also need faster progress towards normalising the human rights and economic situation in the area.

Unfortunately, the election of the Rajapaksa Government has meant a widening of military involvement in civilian matters, rather than the reduction called for in resolution 30/1. The Prevention of Terrorism Act remains in place and in use, despite the promise to repeal it and replace it with more proportionate measures.

It is also tragic the relatives of people who disappered during the civil war and are still missing have not been given answers on what happened to their loved ones.

During my day in Geneva, I met representatives of a number of countries including the UK FCO, the Czech Republic, Austria and Sierra Leone. I urged them all to maintain the pressure on Sri Lanka to meet their commitments under 30/1.

I appealed to them to consider further action too. The resolution was initially agreed after David Cameron had made the case for an international investigation into crimes committed during the civil war. If 30/1 is not delivering progress, then the international community needs to go back and reconsider what kind of international process might be needed to collect the evidence needed to secure accountability and justice.

In this country, the Government is due to bring the "Magnitsky Act" into force soon. This measure was championed by Foreign Secretary, Dominic Raab, whilst a backbench MP. The new law would give the power to impose travel restrictions and asset freezes on individuals believed to have committed war crimes.

Similar provisions in the US were recently used to issue a travel ban against senior military figure, Shavendra Silva. General Silva and his immediate family members are now prohibited from travelling to the US.

Mr Silva was in charge of the 58th Division which encircled the final stronghold of the rebels in the last stages of the civil war that saw at least 100,000 people killed. Secretary of State, Mike Pompeo, said in a statement that ”the allegations of gross human rights violations against Shavendra Silva, documented by the United Nations and other organizations, are serious and credible.”

These allegations are denied by Mr Silva but their seriousness means that the UK Government needs to consider whether it should start to issue travel bans and asset freezes against figures within the Sri Lankan establishment where there are is evidence they are responsible for war crimes.