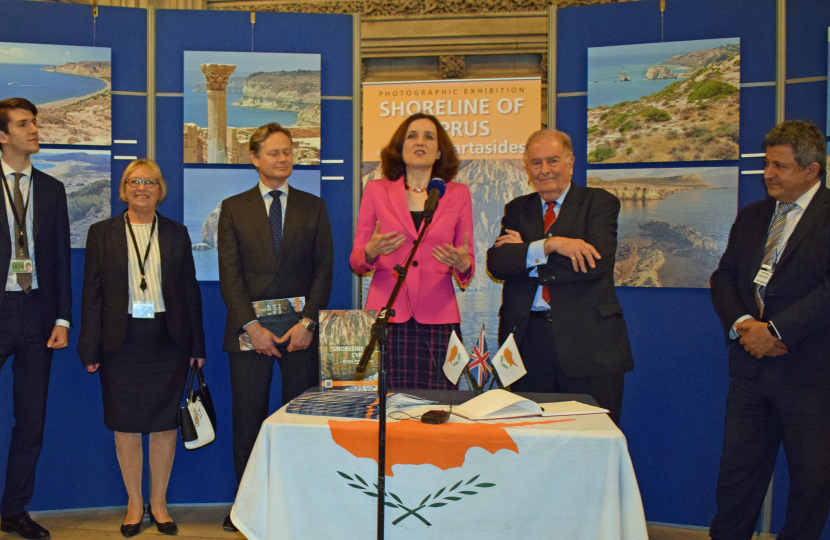 "I very much understand the distress and anger felt about the continuing division of the island. Those who fled from their homes in 1974 continue to suffer greatly. The brutal invasion of Ukraine by Russia is a reminder of the horrors of war and its devastating impact on the civilian population.

For over two decades I have championed the Cyprus cause. No one has highlighted it more often in Parliament than I have, and I’ve visited the island many times to hear from the people harmed by Turkey’s invasion.

I strongly support a free and united Cyprus. During my time in elected office, I have been involved in countless campaigns and initiatives supporting this cause. I have attended hundreds of Cypriot community events. I have met four successive Presidents of Cyprus, including Mr Anastasiades. I am the President of Conservative Friends of Cyprus and a vice-chair of the All Party Parliamentary Group for Cyprus.

I want to see a just and viable solution agreed between the two sides which respects the human rights and the territorial integrity and sovereignty of the Republic of Cyprus.

I support a bizonal, bicommunal federal solution to reunite Cyprus, in accordance with the UN resolutions to which you refer. I believe that Turkey should withdraw its troops.

I do not believe that any future settlement should include third country guarantees. I have spoken out against such guarantees in the House of Commons because they are unnecessary and unjustified for a modern democracy like Cyprus.

I have also raised grave concerns about the actions of Turkey in the Eastern Mediterranean. The UK Government has condemned Turkish drilling in the waters around Cyprus and continues to call for de-escalation. Ministers have confirmed their support for the sovereign right of the Republic of Cyprus to exploit the oil and gas in its internationally agreed Exclusive Economic Zone.

I have been outspoken in my condemnation of the re-opening of the beach front at Varosha. This was disgraceful. Ministers have assured me that the UK continues to fully support UNSC Resolutions 550 (1984) and 789 (1992) on this issue. The UK issued a National Statement expressing concern and also strongly supported the 23 July UNSC Presidential Statement which condemned the announcement on Varosha made during the visit of President Erdogan to Cyprus on 19-20 July 2021.

I will always maintain the pressure on the UK Government to do all it can to facilitate negotiations and support Cypriots in their efforts to reunite their island. Ministers continue to encourage all sides to engage constructively and demonstrate they are committed to making progress towards a settlement.

Please be assured of my continuing support for a unified Cyprus and for my British Cypriot constituents. I work hard on these issues, and fight for your cause every day."