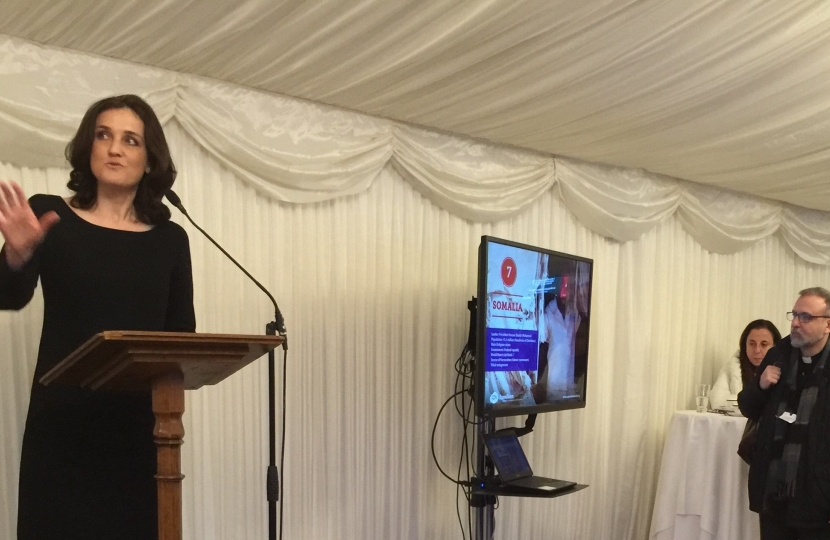 Theresa Villiers, MP for Chipping Barnet, last week hosted the Parliamentary and press launch of the Open Doors 2016 World Watch List: the list of the 50 most dangerous countries for Christians to live. Over 100 Members of Parliament attended. After an introduction from Theresa, the event heard stories from aid workers about their experiences supporting Christian communities facing attacks and discrimination in the Middle East.

The annual World Watch List is put together by the charity Open Doors, an organisation that provides help for persecuted Christians across the globe. Open Doors helps Christians in many countries by providing training to church leaders, supporting victims of violence and raising awareness in Europe and north America. The charity was first founded in 1955, with the smuggling of Bibles behind the Iron Curtain into Communist Eastern Europe.

Theresa became involved in Open Doors when she was approached by constituents about the work of the charity.

Theresa said: “Supporting the Open Doors campaign has opened my eyes to the scale of suffering and injustice which so many Christians face around the world. Freedom of religion is a right that everyone should enjoy, and here in this country we should feel a special sense of responsibility towards Christians around the world who are being forcibly prevented from living and worshipping in the way they choose.”

“This is an issue that has shot up the agenda in Parliament in recent years. The persecution of Christians is getting worse in every region in which Open Doors operates. In a long list of countries, people have been brutalised, have lost their dignity or their liberty because they share the same Christian faith as many in this country. Conflict-ridden and failed nation states continue to intensify existing problems.”

Verifiable records show that at least 4344 Christians were killed for directly faith related reasons during 2014, double the number for 2013. For 2015, the figure rises to 7,100 verified cases. Theresa Villiers and Open Doors believe that the actual figure could be considerably higher.

For more information on the work of Open Doors, or to support the charity, go to:

The findings of the World Watch List are summarised in the report Freedom of Religion and the Persecution of Christians, which can be downloaded at: