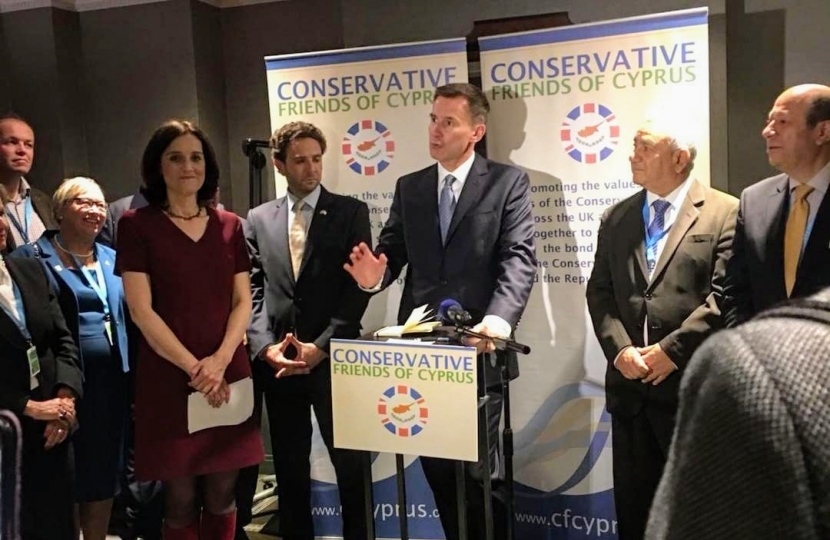 The Chipping Barnet MP Theresa Villiers has welcomed a statement by the UK Foreign Secretary indicating the status quo in Cyprus is unacceptable and a solution must be found.

Jeremy Hunt made the remarks in a speech to a reception for Conservative Friends of Cyprus (CFC) at the Conservative Party conference in Birmingham which was hosted by Theresa on Sunday.

The Secretary of State said the UK government remains committed to solving the long-standing issue of the divided Mediterranean island and that a federal option would be the best outcome.

Theresa, who is president of CFC, said she hoped that talks between the two sides would start up again.

“It was hugely disappointing that the Crans-Montana process ended without an agreement when such high hopes had been vested in it,” the former Northern Ireland Secretary said.

“We all hope that negotiations can restart in order to provide hope that a settlement will be finally be reached. I know that is what President Anastasiades has called for and I very much hope that the Turkish Cypriot side will respond positively.

“For very nearly 20 years I have campaigned for freedom for Cyprus and I will continue to do so in partnership with the British Cypriot community in my constituency. Most recently, I have spoken out in Parliament on how inappropriate it would be to include third country guarantees in a new settlement in Cyprus. These belong in a colonial past, not a modern democracy, subject to the rule of law and full human rights protection.”

Other prominent members of the Cypriot community who were there included Tony and Barbara Yerolemou, Andre Chris, Antonis Savvides, Serafim Diakos, Demetrios Markou, and the broadcaster and photographer, Doros Partasides. The event was sponsored by Tony Barbara Yerolemou.