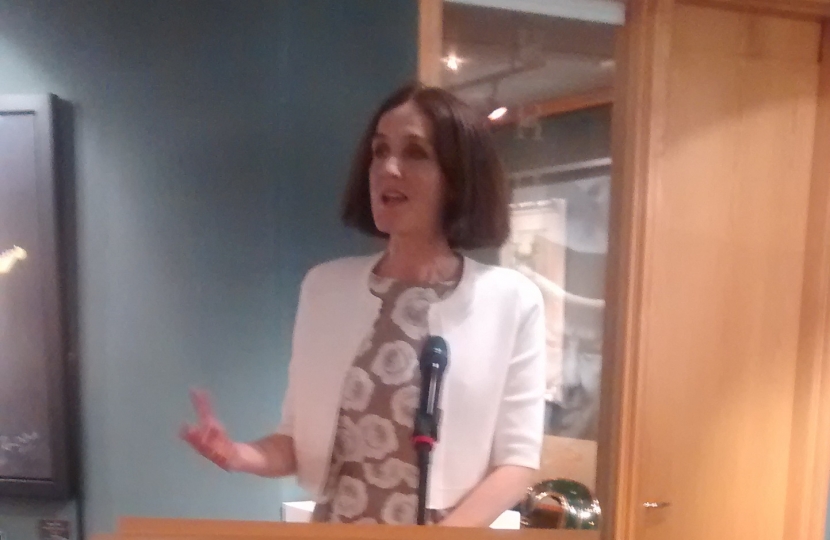 Addressing the party conference reception hosted by the British Tamil Conservatives this evening at the Castle Fine Art Gallery in Birmingham, Theresa Villiers expressed her support for the Tamil community in Britain, saying.

“It’s great that the British Tamil Conservatives are back at the party conference.

Your reception here at the Castle Fine Art Gallery is now a crucial must-attend event in the diaries of many MPs and Ministers.

I’d like to thank the BTC and all its members and activists who helped out in the Mayoral election.

Whilst we didn’t get the result we wanted, we ran a vigorous campaign and, as ever, Tamils played a key role.

This event is always an important opportunity to celebrate the achievements of the Tamil diaspora in the UK, with outstanding success in education, business, science and medicine, along with many other fields of activity.

But this gathering also gives us the chance to reflect on the situation for Tamils in Sri Lanka and the suffering to which many of them are still subjected.

It’s been over 7 years since the war ended in Sri Lanka. And yet in many areas in the North and East, Tamils are still living in a highly militarised environment. Levels of deprivation for Tamils are high and the Sri Lankan Government still isn’t doing enough to address the grievances which fuelled the conflict.

As the UK Government said recently in the 33rd session of the UN Human Rights Council, there is much that is yet to be done to deliver UN resolution 30/1.

We need to see the repeal of the Prevention of Terrorism Act, the release of more civilian land occupied by the military, and credible justice mechanisms so that those responsible for war crimes are held to account. Most important of all, we need far reaching constitutional reform and devolution so that Tamils at last have equal treatment and a strong voice in how they are governed.

Sadly there is still much to be done before there is real justice, equality, and freedom for the Tamil people. But your friends here in the Conservative Party will be at your side as you take your campaign forward.

That is why there are so many of us here today. The statement to the UNHRC shows that our Prime Minister and her new Government are serious about these matters.

Your Conservative friends in Parliament know you have a just cause and we will continue to work with you and support you and champion your cause, until there is fair settlement in Sri Lanka and your goal of freedom and justice for the Tamil people at last becomes a reality.”

Other MPs attending including Chris Grayling, David Burrowes, Paul Scully, and James Berry, chairman of the All Party Parliamentary Group on Tamils. Former MP, Nick De Bois also came along to offer his support and thank the Tamil community for their work to support Zac Goldsmith during the London mayoral elections.

A message of support from Lee Scott, former MP for Ilford North was read to the meeting. Lee was unable to attend due to Rosh Hashanah.