MP calls for sanctions to be re-imposed on Iran 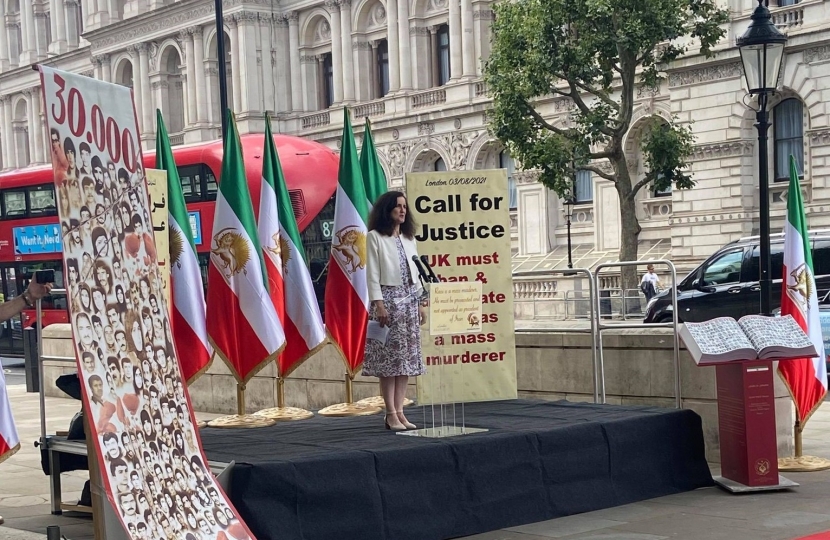 The borough of Barnet is home to a significant British Iranian community and Theresa Villiers has therefore taken a longstanding interest in the campaign for democratic reform in Iran. Earlier this month, she took part in a debate on Iran's failure to comply with its obligations under the nuclear deal known as the Joint Comprehensive Plan of Action (or JCPOA). She used this as an opportunity to highlight human rights abuses in Iran and the security threat the Government in Tehran poses to countries such as Israel and others in the region.

She told the debate in Westminster Hall: "Before the JCPOA, the international community had built up one of the most extensive arrays of sanctions against Iran ever imposed on any country, ever. That pressure brought the Iranian regime to the table. While some of those sanctions remain in place, many were lifted the moment the nuclear deal came into operation.

That gave a significant boost to Iran’s oppressive theocratic regime and to its enforcers, the Iranian Revolutionary Guard Corps. It meant even more money to fund its violent proxies in Lebanon, Iraq, Gaza, Yemen and Syria, and left it free to pursue its genocidal intentions towards Israel, which its supreme leader is clear he wants to destroy utterly. Yet, as we have heard, the deal did not include Iran’s ballistic missile programme, its international sponsorship of terrorism or its shocking abuse of human rights. No wonder the Prime Minister called it a “bad deal”.

In August, the E3 coalition of the UK, France and Germany confirmed that Iran is in flagrant breach of its obligations, taking what it described as “key steps in the development of a nuclear weapon”. The E3's statement was clear that Iran has “no credible civilian need” for the measures it has taken.

What more belligerent violations are needed before the international community wakes up and snaps back those sanctions that have been lifted? I would appeal to the Minister, please, not to reward Iran for breaking its promises and for stepping up its rush to nuclear weapons. I appeal to him to accept that trying to revive this deal in its current form amounts to appeasement. It pains me to use such a loaded term, but that is what we are talking about.

The last time we debated Iran in this Chamber, our late colleague Sir David Amess expressed his regret that he was in his fourth decade of criticising the Iranian regime. For those many years, he campaigned bravely and forthrightly for a free and democratic Iran. All of us involved in the cause will miss him greatly. On this issue, as on so many others, he called it like it is. Time and again he denounced the appalling human rights record of the mullahs’ regime.

Hundreds died in the November 2019 protests, when savage reprisals were meted out to peaceful protesters. Hostage taking leaves dual nationals trapped in Iranian jails for years on end. Journalists, bloggers and opposition activists are subject to intimidation and arbitrary detention. Women are deprived of basic freedoms and members of the LGBT community can face the death penalty just because of who they are.

Let us stop the pretence that the JCPOA can still be made to work. It is fatally flawed. It was always far too weak in what it asked Iran to do. All sanctions should be reimposed with Magnitsky measures applied against regime leaders, including those involved in the mass killings of 1988. It is time to stop appeasing this pariah regime and instead apply all the pressure that we can to ensure its economic isolation, so that we have a chance of delivering a deal that has a real impact, constraining its malign and brutal activities, both at home in Iran, and around the region."