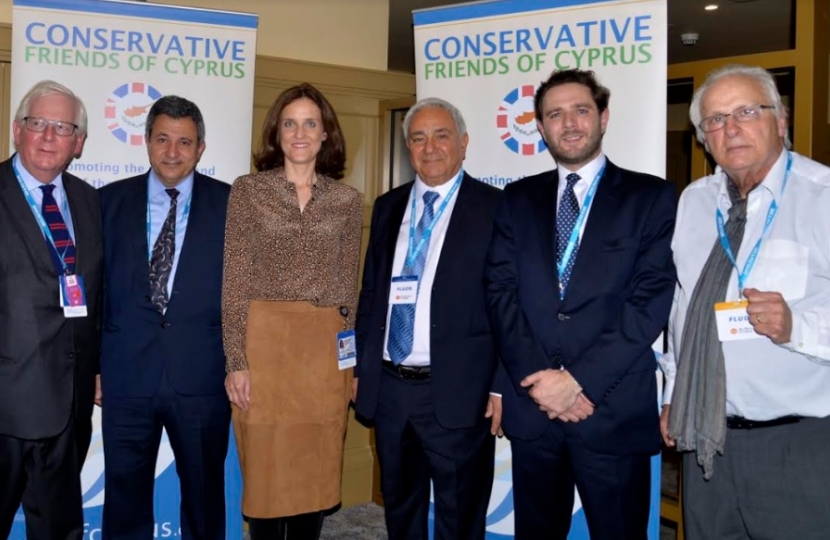 Theresa Villiers MP hosted the annual reception for Conservative Friends of Cyprus at the Conservative Party Conference at the Midland Hotel in Manchester last week.

The event was packed with a crowd of around 200 people, with national media attending to hear a speech from the Foreign Secretary, Boris Johnson. Other distinguished guests included: Mike Freer, MP for Finchley and Golders Green; former MP and MEP, Ian Twinn; President of the World Federation of Cypriots, Andreas Papevripides; Chairman of the Federation of Cypriots in the UK, Christos Karaolis; Tony and Barbara Yerolemou; journalist and broadcaster Doros Partasides; Andreas Markou; Conor Burns MP; and chairman of Conservative Friends of Cyprus, Cllr Jason Charalambous.

In her speech to the event, Ms Villiers said: “I have been hosting this event for Conservative Friends of Cyprus for many years. It is always an important occasion to reflect on the sadness we Conservatives feel at the continuing division of Cyprus.

Many of us had great hopes regarding the most recent round of negotiations. It genuinely looked as if progress was being made on vitally important issues. It also seemed clear that both leaders had expressed willingness to try to accommodate the concerns of the other side and President Anastasiades, in particular, was prepared to contemplate real compromise for the sake of a settlement.

It was therefore a huge disappointment when the issues of security and guarantees meant that the talks broke up without agreement. I stated clearly in the House of Commons that third country guarantees should have no place in the constitution of a modern European democracy. They are part of a colonial past and the rationale for imposing them has long gone. There are other, much more effective, ways to ensure security and stability.

So it is deeply to be regretted that this issue is what caused the talks to fail as so many other processes have. But rest assured that your friends in Parliament will continue to champion your cause.

We now need the help of the Cypriot community in the months running up to the local elections in London in May. The Conservatives have excellent Cypriot candidates like Jason Charalambous, Lisa Rutter and Barry Evangeli. So I appeal to every one of you to commit to helping out with that vital election work so we can ensure that the British Cypriot community remains strongly represented in local Government in London.”

Ms Villiers also thanked Tony and Barbara Yerolemou for their sponsorship of the event.