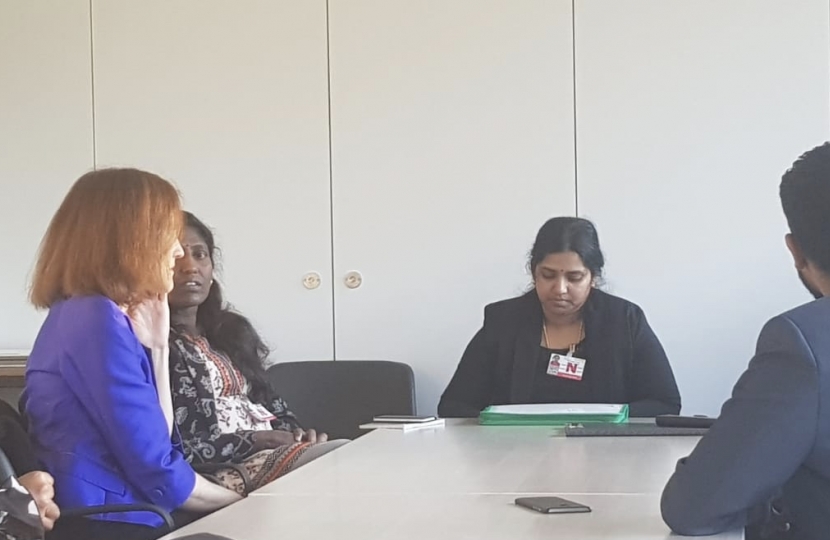 The Rt Hon Theresa Villiers MP visited the UN Human Rights Council (UNHRC) in Geneva last week to urge the national delegations attending the meeting to keep up the pressure on the Sri Lankan government to implement resolution 30/1. This 2015 UNHRC resolution calls for respect for human rights, accountability for war crimes, and investigation of what happened to people who went missing during the conflict.

“Many of my Tamil constituents have expressed their frustration and sadness that progress on implementing resolution 30/1 has been so slow,” Theresa said following her visit.

“Although there has been some limited progress, such as establishing a body to try to find out the fate of the missing people, the north and east of Sri Lanka remain heavily militarised, and no prosecutions have been brought for war crimes. I will continue to support the campaign by the British Tamil community for implementation of the resolution as part of efforts to deliver justice and reconciliation in Sri Lanka.”

The visit to was organised by the British Tamils Forum and the British Tamil Conservatives. During her time in Geneva, Theresa met survivors of the conflict, including women who endured the infamous events at Mullivaikkal.

During her speech to the event, she said: “I want to pay tribute to the work of the British Tamil Conservatives and other Tamil groups for their work in championing the cause of human rights and accountability in Sri Lanka.”

“The British Tamil community has played a highly effective role altering UK foreign policy towards Sri Lanka. Since returning to Government in 2010, the Conservatives have repeatedly lobbied for the human rights of Tamils to be respected.”

“It was following a meeting with British Tamils that David Cameron decided to make his ground-breaking visit to the north of Sri Lanka in 2013, the first leader of a major world power to do this. That visit was a world-changing moment. The pain of the victims of the conflict who he met, the pain of the mothers of the disappeared, was all too clear from the television pictures that went around the world.”

“The work of the UK Foreign Office in the UNHRC was a direct consequence of that visit by David Cameron and the efforts of UK diplomats were crucial to securing 30/1. So well done to all my Tamil friends for all you have achieved in influencing UK foreign policy.”

“Please tell all your friends and family that getting involved in politics does make a difference. It is worthwhile. You can change things for the better and I look forward to continuing to support your efforts to deliver a peaceful and reconciled future in Sri Lanka."