Hope for a reunited Cyprus: Villiers speaks up at the Conservative Party Conference 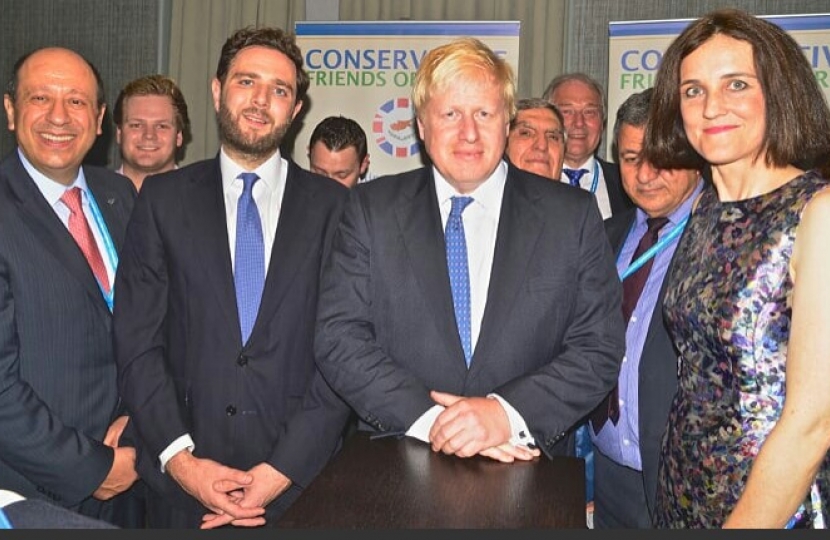 The Rt. Hon. Theresa Villiers, Member of Parliament for Chipping Barnet and President of the Conservative Friends of Cyprus, spoke on Sunday evening at a packed meeting at the Conservative Party Conference on the prospects for progress towards reuniting Cyprus.

Ms Villiers, Cyprus High Commissioner, Euripides Evriviades, and Foreign Secretary Boris Johnson, all expressed support for the negotiations underway and express cautious hope that this time they might succeed.

Ms Villiers, Enfield Southgate MP David Burrowes, and Foreign Secretary Boris Johnson all emphasised the importance of the close links between the British Cypriot community and the Conservative Party, to rapturous applause from the audience.

Theresa said: “I believe that we have a reason to be upbeat, even a little optimistic. We should support the negotiations between the two leaders in the cautious hope that it is possible this time round the talks might finally lead to a successful outcome. And, above all, we should celebrate the warmth of the bilateral relationship between the UK and Cyprus which has probably never been better than it is today."

Theresa's speech is below:

"I would like to welcome you all to the annual party conference reception for Conservatives for Cyprus.

I am delighted that so many elected representatives have felt able to join us.

We meet at an auspicious time for Cyprus.

My 17 years of involvement in efforts to reunite Cyprus makes me cautious about expressing a view on the prospects for a settlement.

However, as Phillip Hammond said at this reception a year ago, there is now a real chance of progress.

We have in President Anastasiades and Mr Akinci, two leaders who have a track record of determination to find a solution.

It’s not easy to keep up any hope when negotiations have been underway off and on for the 40 years since the invasion and never had a positive outcome.

But this time round, there seem to be real grounds to believe that the two leaders may be possibly able to reach an agreement which they could recommend to the people in referendums.

The joint declaration of Feb 2014 was an important step forward.

At the recent UN General Assembly President Anastasiades was able to announce progress on a range of issues including the fundamental point that any settlement needs to reflect that fact that a united Cyprus must have a single personality, a single sovereignty and a single citizenship.

I was delighted to be able to secure the support of our new Prime Minister for Cyprus during PMQs.

The new Minister for Europe, Alan Duncan, has recently completed a very successful visit to Cyprus.

It was heartening to hear that during that visit, Foreign Minister Kassoulides and Minister Duncan both commented on how strong and positive the bilateral relationship is between the UK and Cyprus.

Both pledged to work to maintain and deepen that relationship even after the UK’s exit from the EU, a point reiterated by High Commissioner Evriviades this evening.

And it was good news that President Anastasiades had such a positive and successful meeting with our new Prime Minister in Downing Street just a few days ago.

So I believe we should be upbeat this evening, even a little optimistic.

We should support the negotiations between the two leaders in the cautious hope that it is possible this time round the talks might finally lead to a successful outcome.

We should celebrate the warmth of the bilateral relationship between the UK and Cyprus which has probably never been better than it is today, and which both countries are determined will not be damaged or broken by Brexit.

And we should celebrate the fact that Cyprus has very many good friends in the Conservative party committed to supporting the British Cypriot community and working to reunify Cyprus."