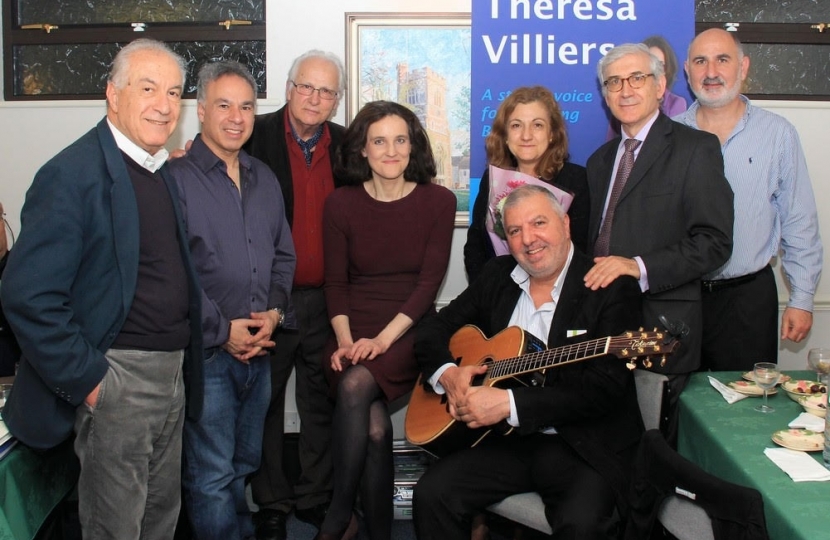 Leading members of Barnet’s Cypriot community came together on Friday to express their support for Theresa Villiers MP.

Theresa has been campaigning in support for Cyprus for over 17 years, first as MEP for London, then as MP for Chipping Barnet. Leading British Cypriots met for a celebration at Theresa’s constituency office in Barnet High Street, sponsored by Aki Ioannides, the Cypressa Katsoris food company, and the Trade Centre of the High Commission of Cyprus.

The organising committee for the event included photographer and cameraman, Doros Partasides, former Mayor of Barnet, Andreas Tambourides, and his wife, Joanna, Barry Evangeli, Antonis Savvides, Andreas Nicolaides, Nicos Savvides, Roberto Weeden-Sanz and Stella and Elias Dinenis. The Chairman of the Conservative Friends of Cyprus, Cllr Jason Charalambous, was one of the guests.

The talented musician, Nicos Savvides, sang traditional Cypriot songs as part of the evening’s entertainment. A number of these songs focused on the pain felt about the continuing division of Cyprus.

Theresa said “I am so grateful to my Cypriot friends and constituents for all the support they have given me over the years. I am strongly committed to the cause of freedom for Cyprus. It is a grave injustice that Cyprus was forcibly divided in 1973 and I will continue to work to support efforts to reunite the island as one country with a single international personality and single citizenship.”

“This has been a high priority for me for nearly two decades and I pledge to continue my efforts to see a resolution in Cyprus based on a just, fair, and balanced negotiated settlement. It was wonderful to hear traditional Cyprus songs from Nicos Savvides. I thank all those attending this evening to show their support.”