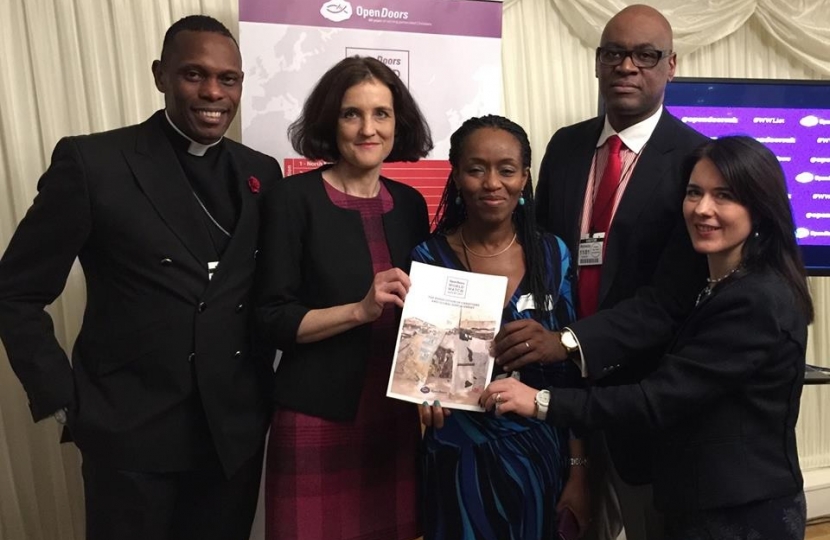 Theresa Villiers, Member of Parliament for Chipping Barnet, this week hosted the 2017 launch of the ‘World Watch List’: a list of 50 countries where Christians face discrimination and persecution because of their faith.

The Watch List is compiled by a charity called Open Doors, which supports the Christian church in countries where it is under attack. At the launch event on the House of Commons Terrace on Wednesday, MPs were briefed on the issues faced by Christians in these countries, hearing from speakers from Iraq and Nigeria. Around 80 parliamentarians attended from six political parties: Conservative, Labour, SNP, Democratic Unionist Party, Lib Dem and the Ulster Unionist Party.

Introducing the event, Theresa reported that eight out of the top ten refugee-producing countries as listed by the UN Refugee Agency feature in this year’s list of places where Christians are subject to oppression and attack. Open Doors estimate that over 50 per cent of Syria’s Christians have left their country. Aleppo, which has been the home of a Christian community for many hundreds of years, has seen over 90 per cent of them flee the city. She highlighted the link between the increase in religious persecution and the global migrant crisis.

Theresa Villiers said: “Religious persecution is a significant component in the global refugee crisis. Never before have so many Christians been on the move as conflict and religious persecution combine to have devastating consequences for millions of people.”

“The launch of the World Watch list is an increasingly important event in the Parliamentary calendar. It gives MPs the chance to show their support and solidarity with Christians under attack in the Middle East, North Africa and other parts of the world.”

Lisa Pearce, CEO of Open Doors UK & Ireland, said "Not only should Article 18 - Freedom of Religion or Belief - not be the human right that somehow comes lower in the priority list than many of the others, but it should be recognised that freedom of religion or belief is the necessary pre-cursor for many other human rights in a huge number of countries that the UK has relationships with.

"The UK is connected through aid or trade with at least 30 of the 50 countries on this year's list. That means we have influence with those countries to varying degrees."

This is the second time Theresa Villiers has hosted the parliamentary launch of the World Watch List. The photo accompanying this article shows Theresa Villiers with guests at the event from the Jesus House church in Brent Cross, with Open Doors CEO, Lisa Pearce, on far right of the picture.