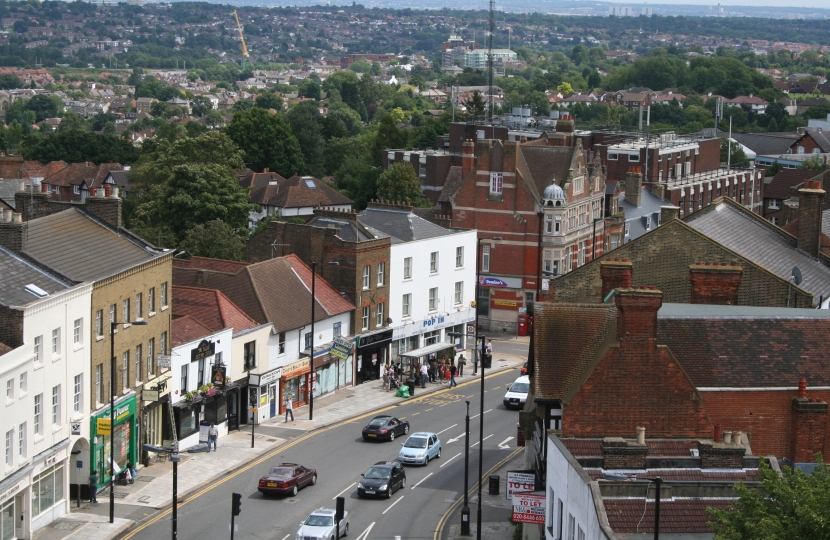 From Theresa Villiers' maiden speech to the House of Commons:

"Chipping Barnet is an outer London constituency bordering Hertfordshire, with a high proportion of commuters. Barnet can be proud of its numerous green spaces, high ranking schools and family friendly environment.

It is a diverse multi-faith, multi-ethnic place to live including highly successful Jewish, Hindu and Muslim communities. The constituency is also the home to a large and flourishing British Cypriot community.

The Borough Council is made up of 38 Conservatives and 25 Labour. Local elections took place on 3rd May 2018. The general election will be held in May 2022.

It is traditional when an MP makes their maiden speech in Parliament, that they reflect on the nature of the place they have the honour to represent. Here is what Theresa said about Barnet in her first speech in the House of Commons on 6th June 2005:

"Let me say something about my constituency. Chipping Barnet is not, as some seem to assume, a rural retreat in the Cotswolds—it is on the northern edge of Greater London. Barnet is where the metropolis meets the countryside. Nor is it an indeterminate suburban sprawl: it is made up of a number of distinct and different villages and communities, including Totteridge, Arkley, Old Fold, Hadley, Hadley Green, Hadley Common, High Barnet, Chipping Barnet, New Barnet, East Barnet, Friern Barnet, Brunswick Park, Oakleigh Park, Woodside Park, Lyonsdown, Underhill, Southgate, New Southgate, Cockfosters, Whetstone and a narrow slice of North Finchley. My apologies to any that I have missed out.

I want to take this unique opportunity to look at the history of Chipping Barnet. The House might be worried to hear that I intend to cover about 1,000 years, but relieved to learn that I intend to do so in about four minutes. The source of the name is Anglo-Saxon: "chipping" means "market" and "barnet" means "clearing by burning", hinting at the area's woodland origins. The first real growth of the community occurred when the main road north out of London to York was routed through the area in about 1100, and the Great North road still runs through the constituency today.

Chipping Barnet took off as a settlement in 1199, when an enterprising bishop set up a market at the top of Barnet hill to provide refreshment for passing travellers. Barnet's early commercial success was not without its disadvantages, however. In 1413, for example, Barnet high street was reported to be so blocked with

"pigs, pigsties and laying of timber trunks and other filth that the transit of men was much hindered."

Sadly, Barnet still has some traffic problems today, and it is famed for the pioneering work of the local council in removing speed humps to get the traffic flowing again.

A little known fact about Barnet is that it was once a spa town. No less a person than Samuel Pepys came to take the waters there in 1664, overindulging by drinking five glasses and making himself ill in the process. And demonstrating that today's youth crime and antisocial behaviour are by no means new problems in the constituency, Barnet was the place where Dickens chose to set Oliver Twist's first meeting the Artful Dodger.

Boom time came to Barnet when it became the first coach stop from London on the journey north. At one point there were between 30 and 40 inns and nearly 1,000 horses stabled around Barnet high street. Equestrian sports remain an important leisure activity in the area although, despite the Government's new laws on 24-hour drinking, there are probably rather fewer bars and pubs in the area today than in more raucous past centuries. Back in the heyday of the coaching era, however, customers were certainly in need of rest and refreshment by the time they arrived, because Barnet hill was the highest point on the old Great North road, at 400 ft above mean sea level. The keyhole in the door of Barnet parish church is said to be on the same level as the top of St Paul's cathedral.

As the coaching trade was killed off by the railways, Barnet began a transition to its modern role of a pleasant residential suburb. The various villages that make up today's constituency expanded gradually when the mainline rail service was built through Oakleigh Park and New Barnet in 1872, and the Northern line reached its furthest extension point when High Barnet station was connected to the underground network for the first time in 1940. That marked the end of London's outward expansion, along with the creation of the green belt by the Green Belt (London and Home Counties) Act 1938. It is difficult to overstate the role of transport in Barnet's development, and the chronic need for improvements to the Northern line and local rail services remains one of the most important issues for the area.

Despite its nominal inclusion as part of our capital city, Chipping Barnet has a vast number of green spaces: parks, commons, open land, even farms and ancient woodlands, some of which may date back to the end of last ice age. Well over a third of the constituency is green belt land or metropolitan open space, and one of my top priorities as its MP will always be the preservation of the green belt and green spaces. I will fight to protect the green belt, both for the sake of our environment and to preserve the quality of life of my constituents. That is why, like my predecessor, I have chosen to make my maiden speech in a debate on the natural environment."