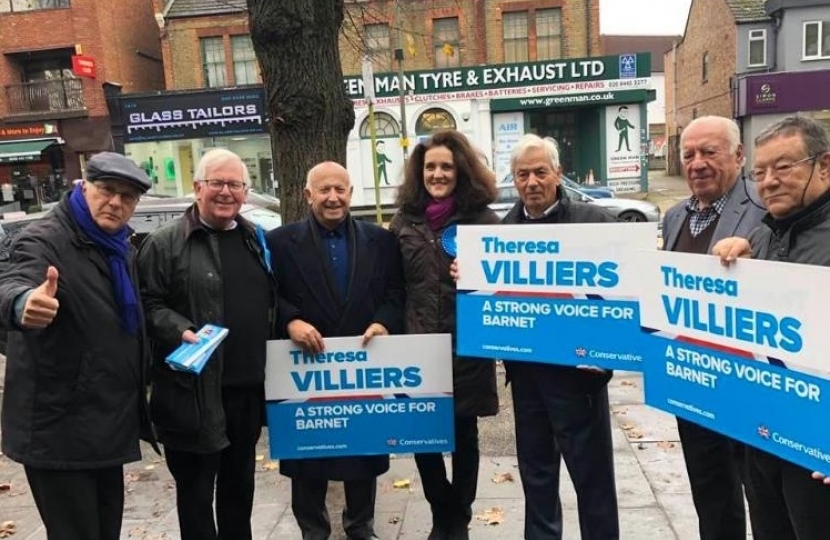 Leading members of the Cypriot community have thrown their support behind Theresa Villiers in her campaign for re-election as MP for Chipping Barnet. At the weekend, she was joined by Doros Partasides, Stella Ellias, Stella and Elias Dinenis, Yiannis Kouvaros, Serafim Drakos, Andreas Tambourides, Leonidas Leonidou, Michael Takoushis, George Karageorgis and others on the general election campaign trail in Whetstone in Barnet.

Theresa has been campaigning for freedom for Cyprus for 20 years and has always been a strong supporter of the British Cypriot community in north London. She has attended hundreds of Cypriot community events over the years, including many Trafalgar Square rallies and lobbies of Parliament.

She has met four successive Presidents of Cyprus, including President Anastasiades, to express her support for efforts to reach a negotiated settlement. She has raised Cyprus matters many times in the House of Commons, including at Prime Minister’s Questions, to keep the issue on the UK political agenda. Most recently, she was the first MP to call for Turkey bring an end to its unlawful incursion into the Cyprus Exclusive Economic Zone.

Following the campaign session, Theresa said “It was great to have help today from my Cypriot friends. I am strongly committed to a free and united Cyprus. One of the reasons why I am seeking re-election to Parliament is so that I can continue to make the case for Cyprus.”

“A grave injustice was perpetrated in 1974. It is a tragedy that Cyprus is still divided 45 years later and Nicosia is Europe’s last divided capital. No other candidate in this election can come near to matching my commitment to the Cyprus cause. I am asking all Cypriots, whatever their usual political affiliation, to give me their support in this general election.”

Doros Partasides said: “I urge every single Cypriot who lives in the Chipping Barnet constituency to vote for Theresa Villiers. She is President of the Conservative Friends of Cyprus and for 20 years she has been fighting for the reunification of Cyprus.”

“Now in this crucial election on 12th December please let us show our appreciation for the all the efforts Theresa has made to support Cyprus. Please give your vote to Theresa Villiers as a true friend of Cyprus and the Cypriot community.”