Villiers speaks out on plight of women in Iran 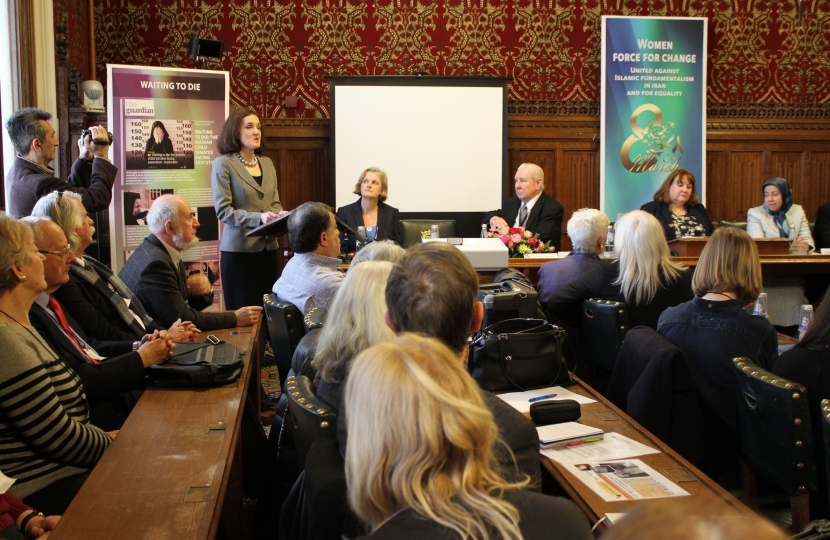 At an event in the House of Commons hosted by the Parliamentary Committee on Iran Freedom to mark the forthcoming International Women's Day next week, Theresa Villiers MP made a speech expressing grave concern about the situation faced by women in Iran. She said:

"I welcome the opportunity to address this meeting to mark the forthcoming celebration of International Women’s day next week. I imagine that everyone here today will be gravely concerned about the human rights record of the Iranian regime. And we should never lose sight of the fact that the oppression dealt out to Iranian women is even greater than that faced by men.

I had the opportunity to visit Iran as a tourist for a few days back in the 1990s. Naturally that meant having to obey the Iranian laws on clothing. This gave me just a small insight into the intrusive control that the Iranian Government wields over its female citizens. It is something that I recall with clarity over 20 years later.

In addition to the ruthless suppression of political dissent which Iran’s theocratic government exerts over all its people, women face systemic discrimination from a legal system which views them as inferior to men.

In April last year, the Iranian Government deployed 7000 so-called ‘morality agents’ whose task was to punish women for wearing the hijab in an incorrect manner, and other activities deemed to be ‘unislamic’ and unlawful.

In 2014, there was a spate of acid attacks against young Iranian women by people apparently motivated by what they viewed as an insufficiently rigorous approach to complying with the rules in Islamic dress. The response of the regime was lacklustre and those responsible have not been caught.

I was disturbed to hear that the UN Special Rapporteur on Iran has recently reported that women continue to be sentenced to stoning. As Amnesty International have pointed out, it is shameful that the Iranian regime treats peaceful activists campaigning for gender equality as 'enemies of the state'. I was depressed to read that the Office of the Supreme Leader had even issued a statement forbidding women from riding bicycles in public.

I consider myself incredibly lucky to live in a country where democracy and gender equality prevail thanks to the dedication and sacrifice of previous generations. The struggle for equality for women in this country was a long and arduous, starting long before the suffrage campaigns of the early 20th century. And none of us should ever take for granted the freedom we enjoy which is denied to women who live in countries like Iran.

So when we reach International Women’s Day next week, I hope that people across this country will reflect on the plight of Iranian women. I hope that in our discussions, in our debates, and in our prayers that day, we will remember those women imprisoned for daring to speak out in favour of the rule of law, respect for human rights and gender equality.

We here all know that every day in Iran, there are gross violations of human rights. Indiscriminate use of the death penalty against men, women and children continues.

Well I sincerely hope that one day the Iranian people will be free of the oppression they face at the hands of this brutal regime; and that we see justice and freedom prevail in that country; and I am proud to be here to give my support to that noble ambition."