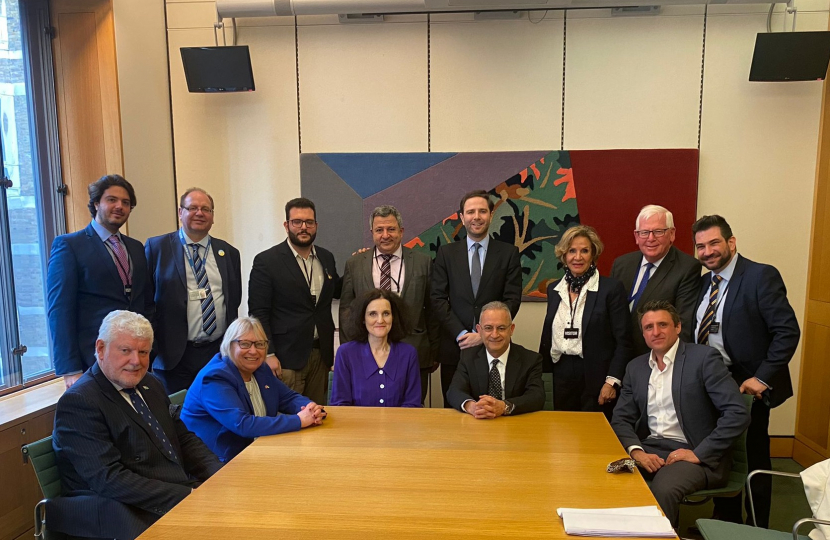 The President of the Democratic Party of Cyprus (DISY), Averof Neophytou, visited the House of Commons yesterday and met Conservative Parliamentarians at a meeting hosted by long-time supporter of Cyprus, Theresa Villiers MP.

Earlier this week Mr Neophytou won the nomination earlier to be the Democratic Party’s candidate for the Cypriot Presidential elections next year.

Speaking after the meeting, which she chaired, Theresa Villiers said “It was refreshing to hear Averof’s insight into the big issues of the day. He is always straight talking and outspoken, and today was no exception.”

“The discussion was wide ranging, including the terrible situation in Ukraine. We also heard Averof’s thoughts on the prospects for a resumption of talks for a settlement in Cyprus. All of us in the UK Parliament who support Cyprus regret that there seems little prospect of progress towards a solution happening soon.”

Cyprus. I have been highlighting the Cyprus cause for over two decades and it has been my privilege to meet many of the island’s elected representatives. It was an honour to be able to host this important occasion in the House of Commons.”

Mr Neophytou had a busy programme for his brief but very successful visit to London, including meetings with Foreign Office Minister, James Cleverley, and the chairman of the Conservative Party, Oliver Dowden. Democratic Rally is the centre-right sister party of the British Conservatives.