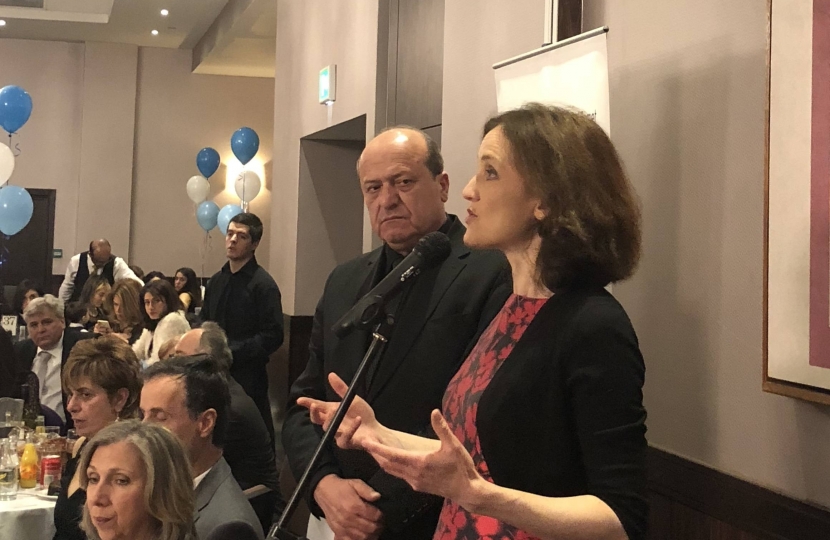 Theresa Villiers, MP for Chipping Barnet, addressed over 400 members of the north London British Cypriot community on Saturday evening at the annual dinner for the Manor Hill Greek School which is based in Totteridge. She used the occasion to highlight concerns regarding the actions being taken by the Turkish Navy to obstruct ships involved in oil and gas activities in the eastern Mediterranean.

Speaking after the event, Ms Villiers said: “It was good to have the opportunity this evening to set out my serious concerns on Turkish interference with hydrocarbon extraction work in the Cyprus Exclusive Economic Zone.

I believe that the actions of Turkey are not acceptable. Cyprus has the right to authorise drilling in its EEZ and Turkey has no right to prevent this activity. I have raised this issue in Parliament and I will continue to press the UK Government to take action. I want UK Ministers to condemn what is taking place and raise this matter with their Turkish counterparts.

It is in the interests of all Cypriots that the natural resources in the eastern Mediterranean are properly explored and hydrocarbon deposits are extracted. There is no justification for Turkey to use ‘gunboat diplomacy’ to threaten vessels undertaking lawful activities in the Cyprus EEZ and I will continue to call for this to stop.”

The Manor Hill Greek School is located in the Totteridge Academy in Theresa Villiers’ Chipping Barnet constituency. Its annual dinner and dance took place at the Royal National Hotel in Bedford Way in central London. Ms Villiers has been supporting this event for several years and it is one of the largest gatherings of the year for the Cypriot community.