Protecting the green belt and green spaces and fighting over-development 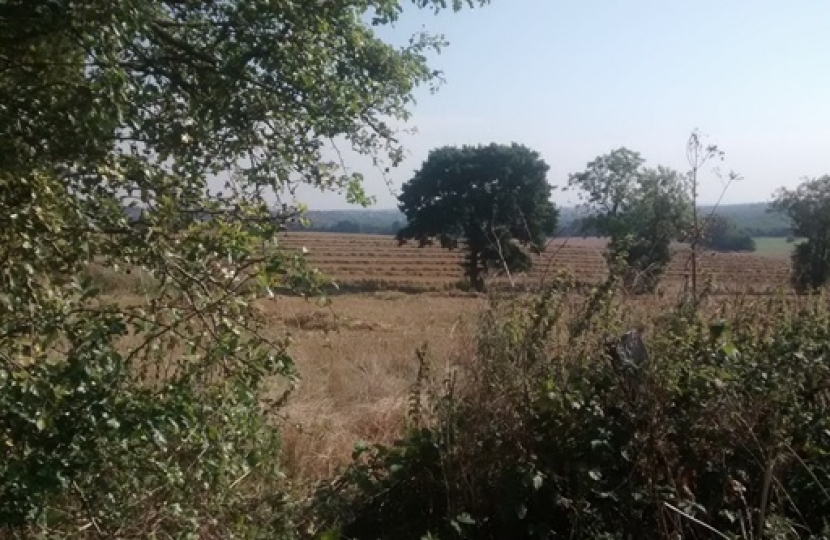 In her maiden speech to the House of Commons, Theresa pledged to fight to protect the green belt in Barnet: for the sake of the environment, and to preserve the quality of life for Barnet’s constituents. Since then, Theresa has worked tirelessly to oppose inappropriate development and protect Barnet’s green spaces, standing alongside residents at planning meetings to support their campaigns:

Read more about current and past campaigns below:

In May 2016, proposals were set out at a public exhibition for a natural burial ground to be placed on the fields behind Barnet Gate Lane and Rockways in Arkley. This would mean thousands of burial plots being placed on green belt land. The same fields have been under threat before. In 1996 a previous application for a burial ground got as far as the Secretary of State before being turned down as inappropriate for green belt land.

On hearing of the proposal, Theresa wrote to residents expressing her concerns: the response came back loud and clear that residents – 99% of respondents – did not want a burial ground on the land. Theresa then set up meetings with concerned local residents, who came together to form an action group to fight the plans. They held a public meeting in November attended by around 150 people.

The campaign group can be found at http://www.savearkleygreenbelt.com/ and any local residents with views on this issue are urged to get in touch. In the face of strong opposition from Theresa and from residents, the burial ground scheme has not gone ahead.

October 2016: Safeguarding our green spaces and local neighbourhoods: Villiers stands up in Parliament

No to tower blocks at NLBP

Theresa Villiers and local councillors, Lisa Rutter and Robert Weeden-Sanz, have pledged to fight plans to place five eight-storey tower blocks at the North London Business Park. The proposed high-rise, high-density housing would result in the construction of 1,200 homes overlooking houses in Ashbourne Avenue, Weirdale Avenue, Howard Close and Brunswick Park Gardens. There is also a real threat that access to the site could include an entrance through Weirdale Avenue and Ashbourne Avenue, residential roads which already have a high number of parked cars.

Gravely concerned, Theresa demanded urgent meetings with the Council and with the developers to set out her strong opposition to the plans. In March 2016, Theresa wrote to residents asking for their opinion. The response was overwhelmingly negative. Issues raised included parking and traffic, and the pressure that such a dense development would place on public services such as GP surgeries and schools.

The plans for new blocks of flats were unanimously turned down by Barnet Council's planning committee. Theresa continues to campaign against this project, alongside Lisa and Roberto.

September 2021: No to even bigger tower blocks at North London Business Park

August 2021: Stop plans to double the size of NLBP!

August 2017: No to tower blocks in North London Business Park

September 2016: No to tower blocks: Villiers keeps up pressure on NLBP

February 2016: No to tower blocks at the North London Business Park

No to 'dog kennel' flats in Barnet

Since 2015, residents had expressed concern about the plans for a new school on the old Barnet Football Ground site in Underhill, particularly regarding size and traffic. Your local MP Theresa Villiers and local representatives took the case forward, and news came through this summer that the plans were being scaled down. Theresa Villiers has given the news a cautious welcome, but has called on Ark to continue to listen to residents and carefully monitor the potential impact on traffic, whatever is built on the site.

Theresa came to the conclusion that the reduction in the scale of the plans was not sufficient to meet the concerns of local residents. Now that the school has been built, she will continue to work to try to minimise the issues with traffic in the local neighbourhood.

In 2016, news came that the trustees of the estate of the late Gwyneth Cowing, which owns the historic Whalebones Park in High Barnet, had asked Barnet Council to put the park on the list of sites suitable for housing development. The site has a unique history, currently consists mainly of woods and farmland, and is surrounded by a conservation area.

Working with local Conservative councillors, Theresa asked for an urgent meeting with the trustees to appeal to them to think again about any plans to build over the property. She also pressed the council to reject the proposal by the trustees that Whalebones Park goes on the list of land suitable for housing development. She raised the matter in Parliament and has written to local residents to seek their views.

Her petition to save Whalebones has attracted well over a thousand signatures. She has been coordinating a campaign against the planning application to build over Whalebones, encouraging residents to send their objections to Barnet Council.

November 2021: Victory in the latest round of the long battle to #SaveWhalebones!

October 2020: Villiers welcomes rejection of plans to build at Whalebones

July 2019: Petition to save the fields at Whalebones presented in Parliament

June 2018: Villiers continues fight to save fields at Whalebones

March 2017: MP campaigns to save green fields at Whalebones

October 2016: Safeguarding our green spaces and local neighbourhoods: Villiers stands up in Parliament

In February 2010, plans were published for the disused gasworks site in Albert Road that would place an Asda superstores right at the heart of New Barnet. Then Tesco starting buying up land too. Local residents, backed by Theresa Villiers, formed the ‘Save New Barnet’ action group. Their goal was to stop the plans for a new Asda or Tesco and put pressure on the council and on the developers to find an alternative solution for the gasworks site. Save New Barnet then produced credible plans for new homes on the site instead. A dialogue began which saw Asda and its advisors work together with the residents on plans for new homes. These received planning consent.

She also petitioned Barnet Council to try and ensure that the CIL funding (a contribution to the local community paid by developers) from the developments was devoted to improvements in New Barnet and East Barnet rather than elsewhere in the borough.

Thanks to the work by Theresa, Barnet Council and local residents, this brownfield site will now be used for new homes, not an unnecessary superstore. The site was sold to One Housing. The plans they put forward initially were problematic but Theresa persuaded them to make improvements. Their planning application was subsequently approved and construction has started and new homes are on the way.

May 2020: Villiers and Byers campaign against overdevelopment in New Barnet

February 2015: Villiers welcomes final victory in battle against a superstore in New Barnet

Cat Hill – standing up for residents

Alongside local residents in East Barnet, Theresa worked for several years to oppose inappropriate, dense, high-rise development at Cat Hill because she was concerned that it would destroy local green space, worsen flood risks, and place serious strain on local services and infrastructure.

Despite widespread opposition from residents, the planning application to build on Cat Hill was eventually passed by Labour-controlled Enfield Council and work on the site began in 2014. Theresa has kept up the fight to defend her constituents, wading in to battle when, as predicted, houses and gardens in East Barnet were flooded after hundreds of trees were removed from the development site.

February 2016: Villiers wades in on behalf of flooded residents

In 2011 the North London Waste Authority (NLWA) proposed to place a waste recycling unit in Pinkham Way next to the North Circular in Friern Barnet. The site was originally a sewage works, but in the 50 years since the works closed down, it became a green space, and has recently been classified as Site of Importance for Nature Conservation (SINC). The proposed new plant would have been less than 100m from housing and with 14 schools within a 1.5km radius.

A long campaign followed. Theresa worked extensively with then local Councillor, Kate Salinger, to support resident opposition and lobbied the NLWA to prevent residents’ lives being blighted by a waste disposal plant on the doorstep with thousands of lorries contributing to traffic and air pollution.

A major victory was achieved when the NLWA withdrew the planning application and decided that the existing waste disposal facility in Edmonton was sufficient. Theresa kept up the pressure, encouraging residents to respond to consultations and support the plans for a replacement waste facility to be placed at a more suitable site in Edmonton.

The NWLA still owns the Pinkham Way site and so the threat of a waste disposal plant could be revived in the future. Theresa will continue to monitor the situation on behalf of her constituents who live around the site.

As well as supporting appropriate development on brownfield sites, Theresa has been campaigning for many years to persuade the NHS to bring the derelict Marie Foster home on Wood Street into use. Theresa is also supporting Barnet Council regeneration projects which are delivering thousands of new homes. This shows that it is possible to deliver the new homes we need without building on the green belt or ruining our quality of life in the suburbs.