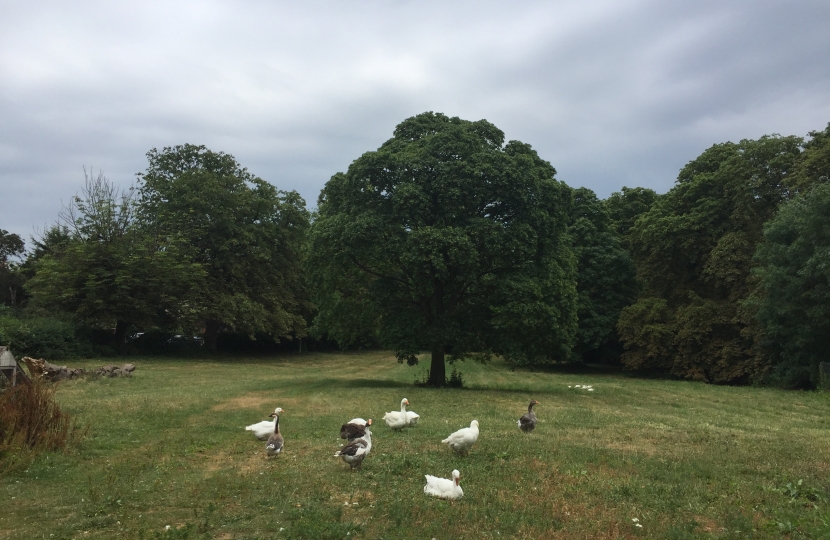 Around a hundred people attended a public meeting in High Barnet on Friday to express support for the campaign to save the agricultural fields at Whalebones from the threat of development.

Whalebones is a 14 acre green space next to Wood Street in High Barnet, 11 acres of which is owned by the estate of Gwyneth Cowing. Miss Cowing was a noted local artist with a great affection for Barnet. She passed away in 1987 leaving Whalebones in her will to be managed as agricultural land for as long as was practical. The executors of Miss Cowing’s estate last year announced that they were considering building homes over the fields.

Theresa Villiers has been working with local ward councillors and concerned residents to campaign to stop development at Whalebones. She invited people to the public meeting in the Christ Church community hall in St Albans Road, High Barnet, to encourage them to become involved in efforts to save Whalebones.

Addressing the meeting, Theresa Villiers said “I am strongly opposed to building over Whalebones. This evening I am asking for your support in the campaign to save the fields at Whalebones. We need to work together to try to stop this.”

“Saving Whalebones won’t be an easy task, but this landmark green space is something we should fight to conserve. Areas like this are one of the things that give our area its unique character and it would be a tragedy if it were to be lost to a housing estate. Once gone, it will be lost forever.”

Those attending the meeting expressed their support for Whalebones and many offered to help with the campaign to save this much loved local green space.

The meeting was also addressed by Culainn Boland-Shanahan who has been working on the campaign and has published a website which can be viewed at www.whalebonespark.com.

No planning application has been published yet, but one is expected soon. In the summer the executors of Miss Cowing’s estate announced that they had entered into a contract with the developers, Hill, giving them an option to buy the land if planning permission was obtained to build there.