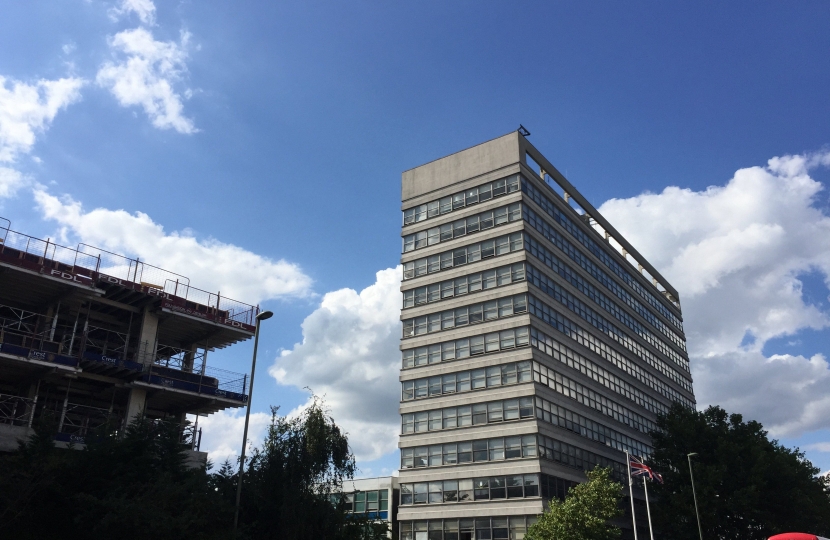 Theresa Villiers, Member of Parliament for Chipping Barnet, has welcomed the decision by Barnet Council to reject the planning application submitted by Meadow Residential for Barnet House in Whetstone. On Thursday 8th February Villiers addressed Barnet Council’s Planning Committee, highlighting the concerns of local residents who oppose the development.

She said: “I have been campaigning for many months against overdevelopment of Barnet House. I welcome the decision made by Barnet Council to reject this planning application.”

“Adding two extra storeys on the top a building as tall as Barnet House would have turned an eyesore into an even uglier one which is even more at odds with its surroundings. Even worse was the proposal for bulky new blocks at the rear of Barnet House, including a new six storey building. If this application had gone ahead, it would have been a hugely dense development, far denser than the applications approved for the nearby B&Q and Sweets Way. It would have been completely out of line with prevailing housing density levels in the Whetstone.”

“It was a shocking mistake ever to have allowed Barnet House to be built. Some of the decisions made on architecture and planning in the 60s were criminally bad and I’d say that Barnet House falls into that category. This planning application would have made that truly terrible mistake even worse and that was why I was at the Town Hall to urge the committee to reject it.”

The planning application was also opposed by the Conservative ward councillors for the area, Caroline Stock, Alison Cornelius and Richard Cornelius.

The initial plans by Meadow Residential for Barnet House, located on the High Road in Whetstone, were to convert the building into 250 ‘micro-flats’ using permitted development rules. After public outcry, these plans were not pursued and a planning application was instead submitted for 215 flats to be delivered by converting offices in Barnet House to residential use and building new blocks at the back of the site behind the tower.