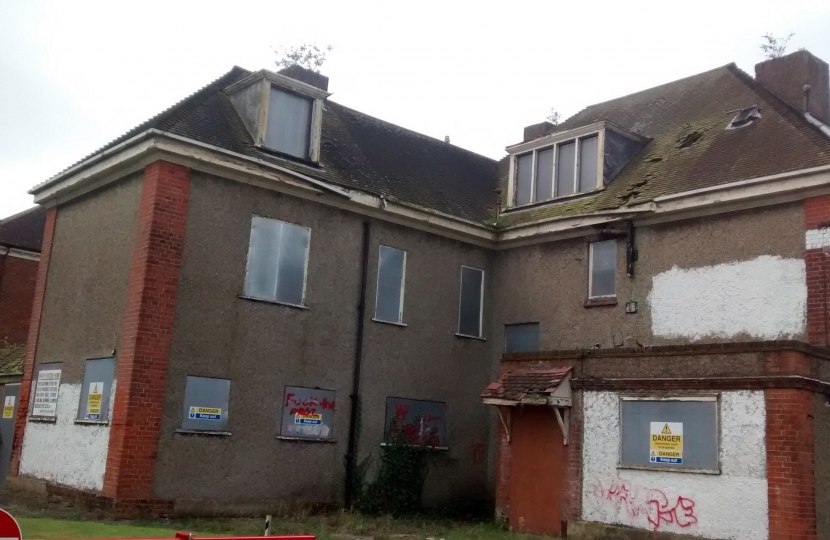 Theresa Villiers, MP for Chipping Barnet, has welcomed the news that the NHS has finally decided that their site in Wood Street in High Barnet should be released for new homes to be built there.

Theresa has been campaigning for many years to persuade the NHS to bring the site into use – either for healthcare purposes or for new homes. The Marie Foster Home building there has been empty since 2011 and the NHS building next to it has been unused for well over a decade.

The decision by the NHS was announced in a letter to the Chipping Barnet MP from Secretary of State for Health, Jeremy Hunt.

Theresa Villiers said “It is scandalous that this large site in the middle of High Barnet has been empty and unused for so long. It has become increasingly derelict. I have been working for years to try to persuade the NHS to put it to good use, either as a GP surgery or housing, or a combination of both. I have raised this personally with the Secretary of State for Health on several occasions and I have also spoken out about this in a Parliamentary debate.”

I very much welcome the announcement by Jeremy Hunt that the land will now be released for new homes. It is also good news that consideration will be given to including key worker housing as part of future development plans.”

“It’s a relief that my long campaign to put the site back into use has finally made progress. I will now be working to seek to ensure that the right plans are taken forward to the site. It is important that any proposals for new homes are in keeping with the surrounding conservation area and do not amount to an over-development. The number of new homes will need to be kept down to reasonable levels, so that they are capable of being supported by local infrastructure.”

“I also want to see the proceeds of the sale of the land used to benefit the NHS in Barnet directly, rather than being returned to the general funds for NHS England or the Exchequer. This is a point I am raising with the Health Secretary.”

The site is being marketed by Montagu Evans and a “For Sale” board was recently put up.