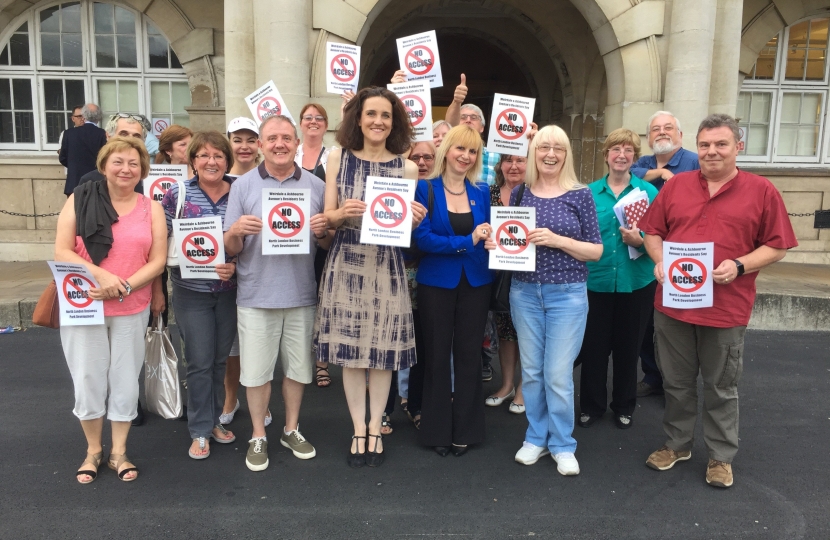 Chipping Barnet MP Theresa Villiers told a planning appeal public inquiry sitting in Hendon Town Hall last week that plans for multi-storey tower blocks at the North London Business Park “would be too high and too dense for a suburban area like Brunswick Park”.

Speaking up for her constituents who object to the plans, Theresa told the planning inspector that she supported the principle of building new homes on the site, but the scale of the buildings and the volume of units proposed were not acceptable.

Speaking after giving evidence, Theresa said, "Barnet Council's unanimous decision to turn down this planning application was the right one and I went to the inquiry to ask for the developer's appeal to be rejected."

"The Brunswick Park area all around North London Business Park is low-rise suburbia where very few buildings are more than two storeys. Building nine storey tower blocks there would be completely inappropriate and a proposed population increase probably topping 3000 would put huge strain on traffic and parking in local roads and on public services."

"I support home-building and Barnet is delivering more than any other London borough, but these plans for NLBP are clearly an overdevelopment which would damage the local environment and quality of life. That is why I am backing the campaign by residents to stop them from going ahead."

“Locating nine-storey buildings in the Brunswick Park area would be inconsistent with the Barnet Local Plan and the draft London Plan."

“It would also clearly contravene the council’s stated policy that new development should respect the appearance, scale, mass and height of the surrounding area.”

Theresa said that It was crucial the views of the local community were listened to in relation to a decision which could have a profound impact on their neighbourhood and their quality of life if 1350 new flats were built on the site.

She added she supported plans for a new building for St Andrew the Apostle School, which is part of the same application. She asked the inspector if the decision on the residential and school component of the appeal so that it would be possible to give the school could be given planning permission whilst rejecting the blocks of flats.

Theresa has opposed the tower block plans since 2016 alongside local councillors, Lisa Rutter and Robert Weeden Sans, and many in the local community.

It was rejected on the grounds it was overdevelopment because of its density; it was out of keeping with the surrounding area due to its height, size, mass and bulk; and was contrary to the pattern of development in the area.