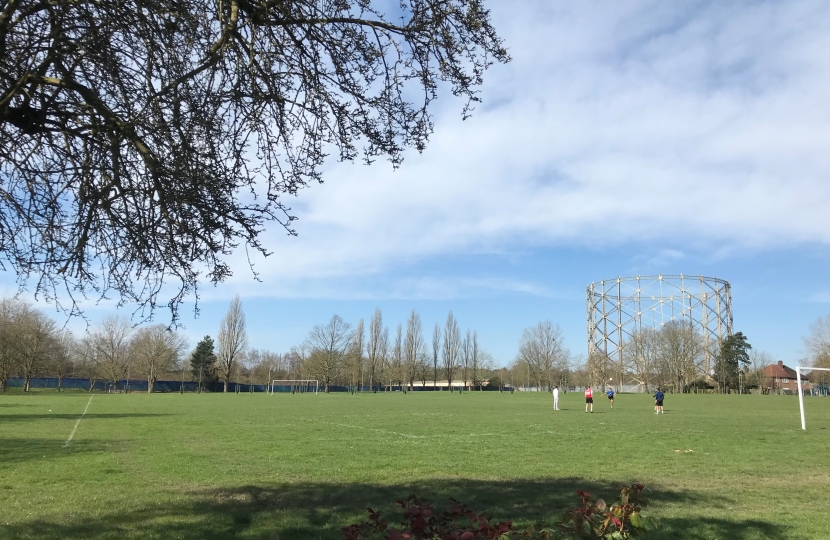 Revised plans to develop Victoria Quarter, the former gas works in New Barnet’s Albert Road, will be opposed by MP Theresa Villiers who has called them “a betrayal”.

One Housing and their new development partner, Fairview, want to increase the number flats to be built there by 300 to over 650, reduce on-site parking spaces, replace all houses in the previous plans with flats, and increase the height of the tallest buildings to 14 storeys.

The move has angered Theresa and residents because One Housing has planning permission for a smaller Victoria Quarter scheme which had support in the community.

Speaking after a meeting this week with the Save New Barnet campaign group, One Housing and Fairview at the New Barnet Community Centre in Victoria Road, Theresa said:

“It’s hugely disappointing that One Housing and Fairview are trying to depart from the previous planning permission that reflected local concerns about the development. This was a carefully agreed compromise and the decision by One Housing to rip that up is a betrayal of the trust and I and others placed in them when we backed their previous application for planning permission.

“Their new proposals would involve a massive overdevelopment of the site, with a significant negative impact on the surrounding neighbourhood. Local roads and infrastructure would be placed under unacceptable pressure.

“I will be campaigning strongly against these revised plans. I believe One Housing should stick with the planning permission it has already been given for the smaller scheme and I urge residents to oppose this overdevelopment threat.”

The debate about the future of this former gas works site at Albert Road in New Barnet started in 2006. Theresa Villiers has been working ever since then in support of local residents trying to get the right outcome.

Together, a community-led campaign defeated plans for a new Asda superstore and the Save New Barnet action group put forward credible proposals for new homes there instead.

After lengthy discussions with One Housing, who bought the land from Asda, a planning application for new houses and flats was put forward. Because of the extensive dialogue with local residents, and the compromises One Housing made to reflect local concerns, Theresa backed that application. It also had considerable support in the community in New Barnet. That is the plan that One Housing and Fairview are now seeking to make drastic changes to.

An exhibition is being held at St Margaret’s Nursery School, Margaret Road, Barnet, EN4 9NT on 12th March from 5.00pm - 8.30pm and 14th March from 11.00am - 2.00pm for residents to look at the changes One Housing want to make to their development.