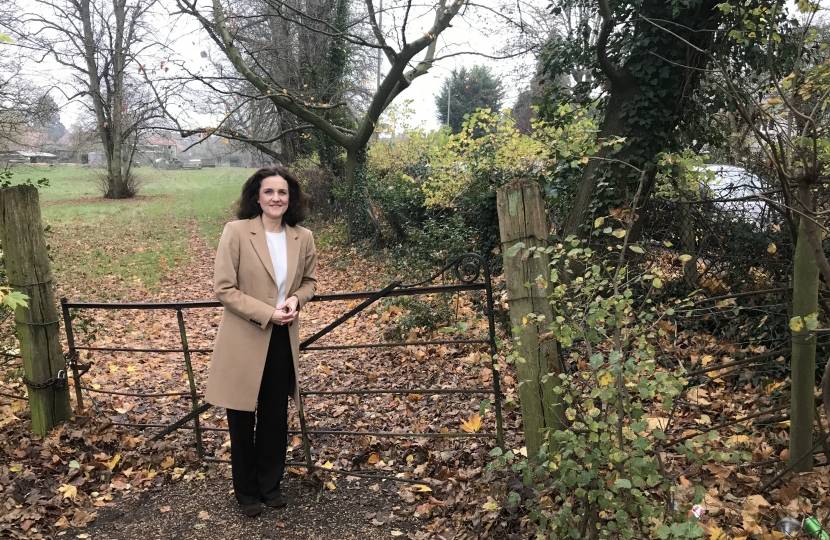 A public consultation on proposals to build on agricultural land at Whalebones has been extended into next month following an intervention by Chipping Barnet MP Theresa Villiers.

Theresa and many local people oppose the building of 152 houses and flats on the fields and woodland in High Barnet which are surrounded by a conservation area.

The planning consultation on the scheme was intended to close on 20th August, but Theresa argued many people would be away on holiday and she pushed for the deadline to be extended.

Barnet Council has now agreed to an extension of the website consultation to the 16th September, with scope for representations after that, possibly as late as the date of the committee hearing on the matter.

“It’s really important this consultation receives as many responses as possible, so the council planning committee is left in no doubt that there is strong local opposition to this development and that residents want to keep Whalebones as agricultural land," said Theresa.

“It is a relief that the council have listened to the case I made to them to extend the deadline to September so more people can take part and make sure their views are heard in the planning process.

"As I have said before, these fields are an oasis of green in the middle of a London suburb. It would be heart-breaking to lose so much of them to development and it would be a great loss to the natural environment in Barnet.”

Theresa presented a petition with over 1250 signatures to Parliament last month demanding a rethink by the developer Hill Residential, and the owners of the land, the Executors of the estate of Gwyneth Cowing.

Miss Cowing was a noted local artist and her will expressed the wish that the fields be conserved for use as agricultural land for as long as possible.

The fields derive their name from the two massive bones of a blue whale, a local landmark that was first erected over the driveway to Whalebones House in the 1860s.

You can take part in the consultation by available by entering the planning reference for Whalebones, 19/3949/FUL, at this link:

Theresa Villiers is encouraging as many people as possible to send in objections to this application.