First victory in battle to stop tower blocks at NLBP 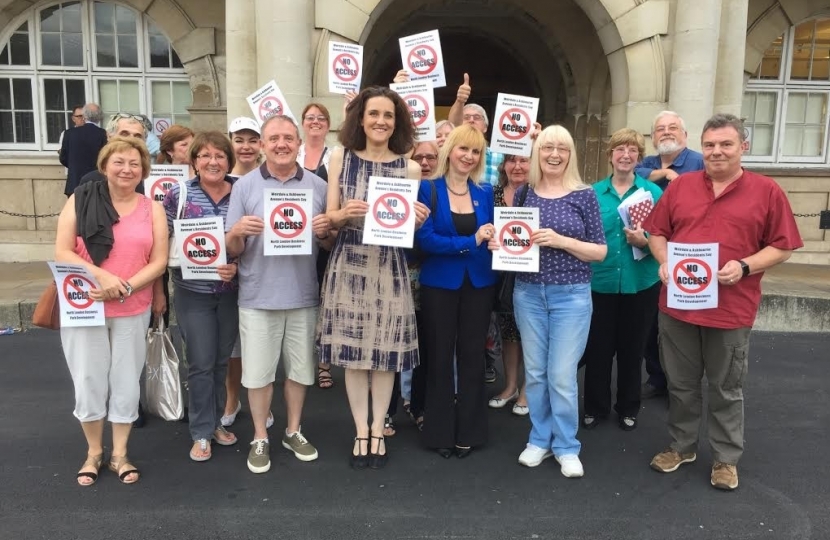 Thursday 22nd June marked a key victory in the long fight to stop multi-storey tower blocks and over a thousand flats being built at the North London Business Park, in the midst of suburban homes, when a planning application from Comer Group was turned down by a unanimous vote in Barnet Council’s Planning Committee.

Back in 2016, Theresa Villiers and local councillor, Lisa Rutter, pledged to fight plans to place five eight-storey tower blocks containing 1,200 homes at the North London Business Park after local people raised an outcry, not least because of a threat that there would be access to the site through Weirdale and Ashbourne Avenues.

Theresa took the case to Barnet Council and also contacted Comer Group, the developers behind the plans, expressing her grave concerns. The developers submitted amended plans, but thanks to the intervention of the Mayor of London, the number of homes proposed was actually increased to 1350. So Theresa’s opposition continued.

When the application came before Barnet Council’s Planning Committee on Thursday, local residents poured in to voice their objections and Theresa gave a speech setting out the key points they had raised with her. The application also included a new building for St Andrew the Apostle School. Theresa backed the new school building and called for it to be separated from the residential part of the proposals so it would be could be considered on its merits.

The Committee rejected the whole application for on the grounds that the housing proposed was overdevelopment because of its density; it was out of keeping with the surrounding area due to its height, size, mass and bulk; and was contrary to the pattern of development in the area.

Theresa Villiers MP said: “New homes should be built at North London Business Park, but the plans proposed by Comer were completely wrong for this area, and would have had big impact on the quality of life of local people. I welcome the Council’s decision. The voice of local people has been heard loud and clear by Barnet Council. I will keep on fighting the proposals if they come back. This is a key battle won, but there is still a danger that the application can go to appeal and be passed by the Mayor of London.”

“I very much support the part of the application which covers a new building for the outstanding St Andrew the Apostle School. I hope that this can be separated from the housing proposals so progress can be made towards delivering the new school.”

Sue Scott, resident of Weirdale Avenue, said "We were horrified by the plans, which were just completely wrong for our area and would have made lives a misery for local residents. I would like to thank everyone who has stepped up and helped to fight this decision: Theresa and Lisa Rutter were brilliant. It wasn’t just that they spoke up for us, they gave the residents a real boost. We were delighted that Theresa came to the Planning meeting. You could hear the cheer go up when she arrived. Comer Homes will not give up but we will keep fighting."

Cllr Lisa Rutter said: "I've worked very hard on behalf of my residents against this application from the beginning. Residents did not want tower blocks, access from Weirdale/ Ashbourne Avenues and had further concerns with parking, traffic, and the capacity of local services. Unfortunately, St Andrew the Apostle Greek Orthodox School was gifted on condition by the developer and linked to the main development being agreed. Although all residents and the committee supported the school, the committee unanimously rejected the application as they saw through the developer using the school as a condition for approving the main development. I am very sorry for the school which is an outstanding school in my ward and I hope they can get their own planning application. I will continue to fight on behalf of my residents to ensure a suitable development on this site in character to the surrounding neighbourhood."