No to tower blocks at the NLBP 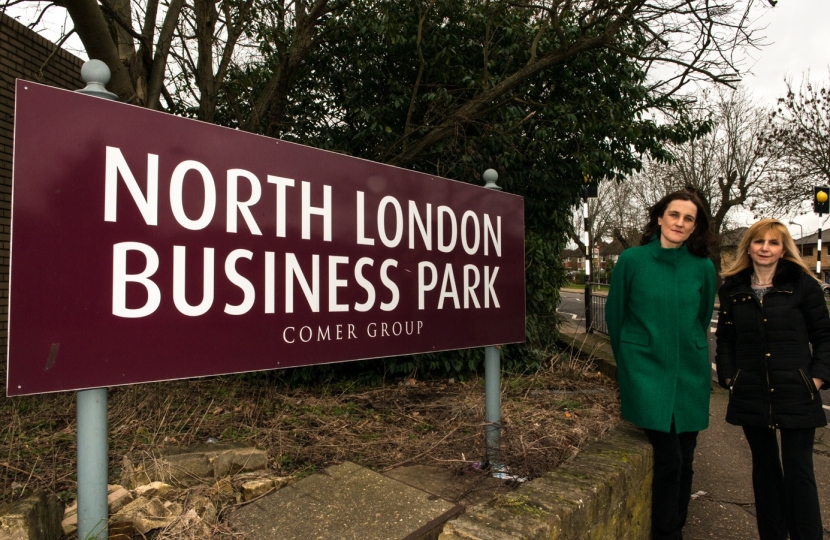 Theresa Villiers MP and local Councillor Lisa Rutter have pledged to fight plans to place five eight-storey tower blocks at the North London Business Park. The proposed high-rise, high-density housing would result in the construction of 1,200 homes overlooking houses in Ashbourne Avenue, Weirdale Avenue, Howard Close and Brunswick Park Gardens. It is even threatened that access to the site would be through Weirdale Avenue and Ashbourne Avenue, residential roads which already have a high number of parked cars.

After hearing of the plans, Theresa and Lisa demanded urgent meetings with the Council and with the developers to set out their strong opposition to the plans.

Theresa Villiers MP said: “I will fight these plans. I accept the need for new homes but eight storey blocks of flats are completely unacceptable. That kind of development would be wholly out of character with the local area; it would disrupt traffic; and put real pressure on local services. If housing is to be built on this site, it must be far less dense in order to avoid impacting on surrounding streets. I also strongly oppose any proposed access through Weirdale or Ashbourne Avenue.”

Cllr Lisa Rutter said: “I have already rejected the proposal after hearing many residents’ concerns at my surgery, receiving many emails and meeting more residents at a recent planning consultation. This proposal is totally unacceptable and will have a serious and detrimental impact on the local area and environment. It gives no consideration to the increased demand on our local services or to the traffic impact on the area  especially with the proposed access of Weirdale/ Ashbourne Avenue. As your local Councillor and elected representative, I will be meeting with the developers soon to discuss a more acceptable proposal to fit with the local community needs.”