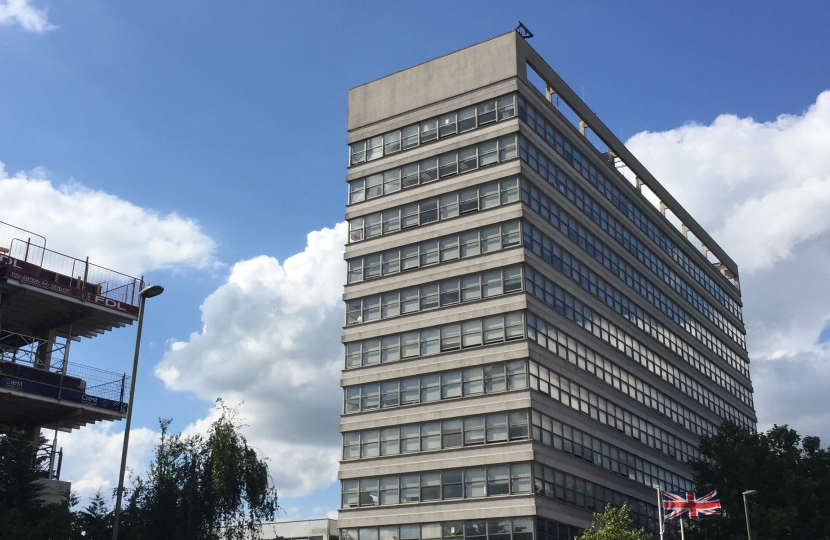 MP Theresa Villiers has asked a planning inquiry to turn down proposals for 260 flats at Barnet House by telling officials from the Planning Inspectorate that the scheme is even worse than the one thrown out four years ago.

Theresa attended the inquiry at Hendon Town Hall on Friday which has been looking at plans by developers Meadow Residential for the twelve storey structure in Whetstone.

She told the hearing the scheme did not address the reasons for the refusal of an earlier planning application.

“In material respects, the application is worse than those 2018 proposals,” she explained. “While there have been some minor alterations to the configuration of the refurbishment and the new build element to the rear, there has been no meaningful change to the overall height, bulk or mass of built form.

As well as adding two storeys to the Barnet House (taking it from 12 to 14), the proposals currently under consideration would see new blocks of flats of up to six storeys built to the rear of the existing tower.

“The plan for 260 flats - 44 more than the rejected scheme - would be a major over-development of the site,” Theresa said.

She said her constituents were against the proposal, especially those from the nearby Baxendale area. She was scathing about the building and the plans to develop it which would do nothing to improve it.

“Adding two storeys to this incongruous and ugly tower would exacerbate its prominence, to the detriment of visual amenity of the wider area. Barnet House is an obtrusive building of no architectural merit,” she told the inquiry.

She explained the scheme was inconsistent with several London and local plan policies. It would also “have a serious detrimental effect on Baxendale Care Home with new blocks of flats looming over its building”.

She said that retention of business use is specified in the Barnet Local Plan as particularly important in town centre locations like Whetstone. The majority of the flats proposed are studio or one bed units when the Local Plan identifies homes of three and four bedrooms as the priority need, she added. She pointed out that only 58 parking spaces are to be provided for the total of 260 homes which is wholly inadequate for what is a car-dependent suburban area.

“I would therefore appeal to you to refuse this application because it is in clear violation of a number of important planning policies in the Barnet Local Plan 2012 and the London Plan 2021," Theresa said.

She then added: “Barnet House is an eyesore and this scheme would make an already ugly and discordant building even taller, bulkier and more visually overbearing and oppressive.

“Future generations will not thank us if we allow the suburbs to be wrecked by urbanising the leafy open low-rise nature of these pleasant areas in which so many of us live.”

This site hit the national news in 2017 after the developers attempted to use permitted development rights to convert Barnet House into tiny flats without planning permission. Dubbed "dog-kennel" flats by the Guardian, this scheme was withdrawn and Barnet Council subsequently adopted a policy which prevented permitted development rights from being used this way in Whetstone town centre.