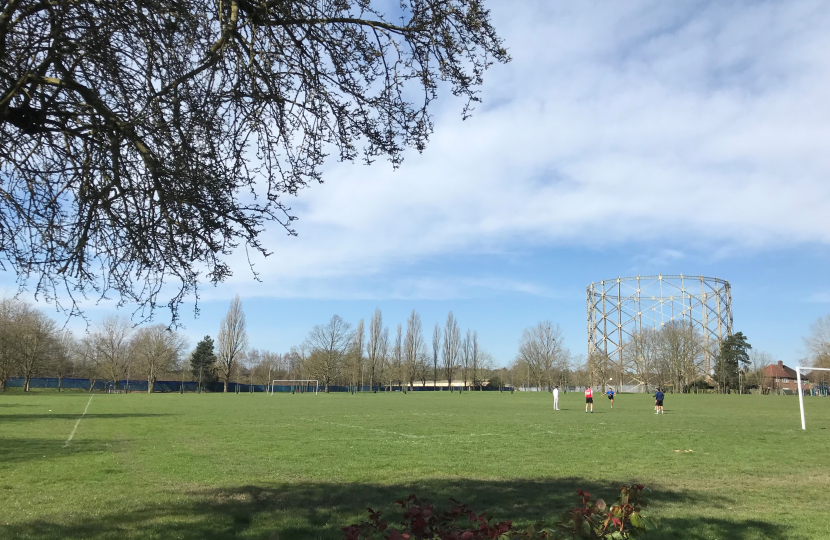 Chipping Barnet MP Theresa Villiers has told a planning appeal hearing that proposals for 539 flats at Victoria Quarter would set a dangerous precedent for future schemes in her Chipping Barnet constituency.

Theresa said Barnet Council’s refusal earlier this year to grant approval for the construction of the flats in 13 separate blocks of up to seven storeys was correct because the development by Fairview Homes does not comply with the Barnet Local Plan.

She said that the lower density plan approved in 2017 for fewer flats at the former gasworks site should be built instead.

Speaking at the public inquiry underway at Hendon Town Hall, Theresa said the plans would “amount to a significant urbanisation of New Barnet”.

“In what seems to be a dash for density regardless of the consequences, vital preconditions for delivering high quality homes and liveable communities have been sacrificed - preconditions such as avoiding excessive noise, provision of children’s play space, and the need to minimise single aspect dwellings.

“The scheme is inconsistent with policies set out in both the London Plan and the Barnet Plan that density should be optimised rather than maximised."

“The height, density, massing and bulk of the buildings would have a very negative impact on the character of the surrounding neighbourhood."

“They will be discordant and completely out of place next to Metropolitan open space in a low-rise Victorian and Edwardian suburb with a distinctive character.”

Theresa added that seven of the 13 blocks had been identified as being at high risk of overheating.

She said they would need to have active cooling in contravention of the London Environment Strategy Policy.

“The extreme weather conditions of recent days are an illustration of why we should take very seriously the need to ensure that new homes continue to be tolerable places in which to live in a changing climate."

“Approving these plans would mean locking in overheating problems for future residents.”

And she added: “These issues are already occurring in some of the high-rise blocks built in Colindale.”

She also said onsite parking was inadequate and the development from some distance from the nearest tube stations.

“This scheme contravenes a number of well-established planning rules. It would damage the local environment for New Barnet residents and I would ask you to reject the appeal,” she said.

To join the campaign against these new blocks, visit http://www.newbarnet.org.uk/.