Villiers welcomes rejection of plans to build at Whalebones 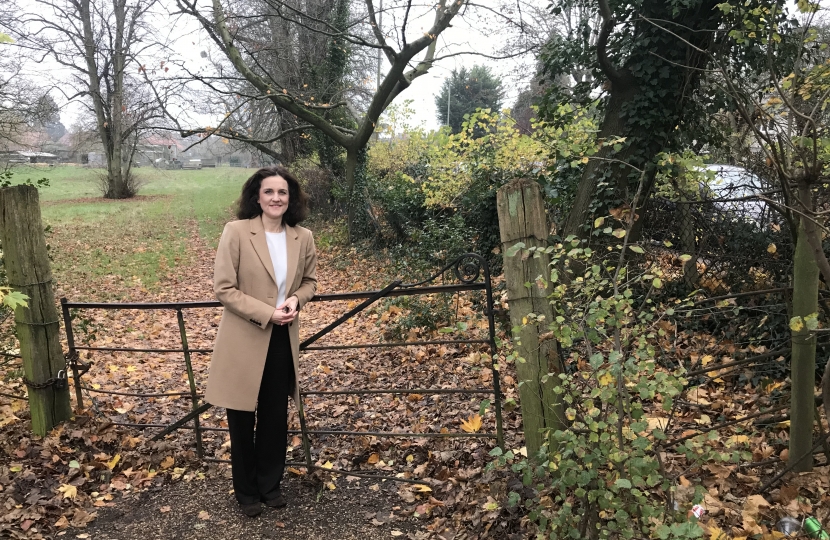 MP Theresa Villiers has welcomed the decision by Barnet Council planning committee to throw out plans to build over fields at Whalebones in High Barnet after local planners dramatically said no to the proposals last night.

In highly unusual situation, the Council’s planning committee was tied and it needed the casting vote of the chair to turn down plans for 152 houses and flats on the land, which is surrounded by a conservation area.

The development by Hill Residential has been opposed by Theresa and the local community for many years. It received 830 letters of objection and just eight in support.

“I welcome this reprieve for these much-loved fields in my constituency,” said Theresa.

“I've been campaigning to save them and I spoke at last evening's virtual planning committee meeting to make the case that this development would be a serious breach of the council’s conservation area policy and mean the loss of wildlife habitats and biodiversity.

“But the fight isn't over yet. The Mayor could decide to 'call in' this application and potentially overturn the result last night.

“I urge Mayor to listen to the 830 residents who objected to these plans. He should uphold the decision by Barnet Council, not overturn it."

Cllr Wendy Prentice joined Theresa in addressing the planning committee to object to the proposal to build at Whalebones and her High Barnet ward colleague, Cllr Julian Teare, voted against the application as a member of the planning committee, making his opposition very clear at the meeting. Local resident, Nick Saul, spoke on behalf of the Barnet Society to explain why the plans should be rejected.

Why I backed a rebel amendment on food and standards

Chipping Barnet MP Theresa Villiers today explained why she rebelled against the Government this week over an amendment to the Agriculture Bill.