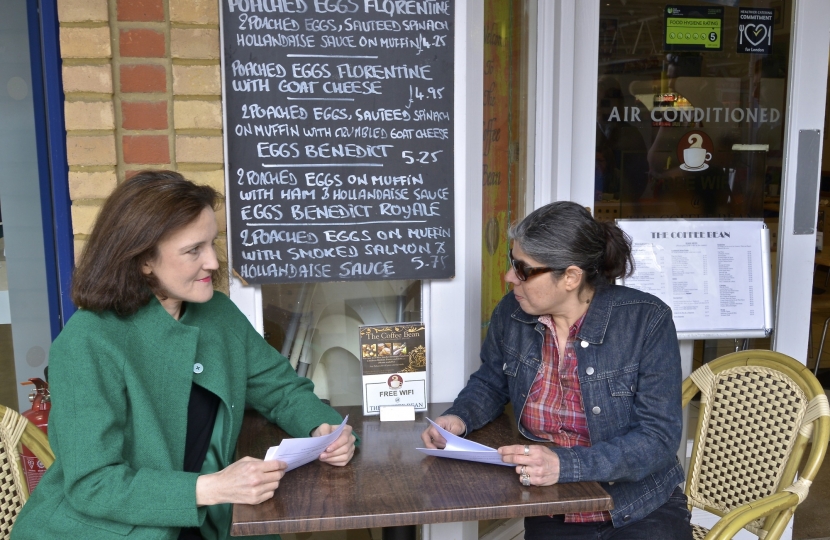 Theresa has consistently supported small businesses and retailers, both in campaigning for local projects in high streets around the constituency and supporting legislation in Parliament to benefit small businesses:

Read more about current and past campaigns below:

Theresa has worked extensively with the Chipping Barnet Town Team to support Barnet High Street, on issues such as revitalising the Spires shopping centre, opposing higher parking charges imposed by the owners of the shopping centre’s car park, and campaigning to save Barnet Market. For many years she has been attending the East Barnet festival and has warmly welcomed the creation of a Christmas Fair for East Barnet Village. She has also been backing the team at Love Whetstone in their successful effort to create the Whetstone festival. Theresa continues to help a range of individual businesses, events and local charities right across the Chipping Barnet constituency.

May 2017: Red faces for Foxtons as estate agent faces prosecution for dilapidated property

May 2017: Helping small businesses and high streets with a fairer tax system

July 2015: Another successful year for the East Barnet festival

February 2015: Villiers welcomes final victory in battle against a superstore in New Barnet

May 2014: Villiers backs new pop-up shop to be opened by ‘Love Barnet’

In the two most recent budgets, Theresa asked for help for local town centres and the Chancellor responded with substantial packages to reduce business rates.

Theresa also welcomed the reduction in Employer National Insurance contributions introduced by the Chancellor to help small businesses, as well as the business rate relief taking effect from 2017.

In December 2016, Theresa used a debate in Parliament to protest about the introduction of compulsory quarterly tax reporting for small businesses through HMRC’s ‘Making Tax Digital’ programme.

Alongside residents' group, Friends of Barnet Market (FoBM), Theresa Villiers fought a long campaign to save our historic market in High Barnet. The market suffered under the previous owners, spending months in a temporary site in the Stapylton Road car park. When it finally returned to its St Albans Road home, it faced very poor conditions for traders and customers, including a terrible uneven surface and tatty hoardings.  After the market's home site was bought by the William Pears Group, Theresa pressed them to deliver the improvements to the market which had long been promised. The market re-opened in St Albans Road 23 November 2013 with a new even surface and much improved facilities for market traders. It has recently moved the bandstand area at the back of the Spires.

She is urging her constituents to shop at Barnet Market which is open on Wednesdays and Saturdays between 7am and 3pm.

November 2013: Villiers and FoBM gather at Barnet Market to welcome stallholders back

November 2013: Villiers welcomes news that Barnet Market will re-open at its upgraded site

The 1471 Battle of Barnet was a significant turning point in the conflict which later became known as the Wars of the Roses. It brought three English Kings to Barnet – Edward IV, Henry VI and the future King Richard III.

With the increased interest in this period in history, and the forthcoming 550th anniversary of the battle in just a few years’ time, Theresa would like to see greater focus on this momentous historical event so it can bring more people to Barnet and help revitalise our local high street. Theresa backed Barnet Museum’s successful application to the Heritage Lottery Fund for research aimed at finding the correct location of the battle. She has been backing the hugely successful Barnet Medieval Festival which has taken place for the last two years.

Alongside Enfield Councillor Jason Charalambous, Theresa helped safeguard the future of the historic manor house in Trent Park. In 2016, she took the case to Enfield Council, Historic England and to the then-Culture Minister Ed Vaizey, arguing that planning permission should not be granted for any development unless the historical significance of Trent Park House was recognised and protected. Alongside with Cllr Charalambous, Theresa encouraged her constituents to sign a petition calling for the conservation of the manor house, retention of public access to key parts of the house and garden, and establishment of a museum. At a meeting in her constituency office with the owners, Berkeley Homes, she received assurances on all three of these important issues.

Lastly, Theresa has highlighted opportunities open to community groups and charities regarding funding from Heritage England to explore local history; and has encouraged them to apply. She is also campaigning against housing development on the historic Whalebones site in High Barnet.

March 2017: Sign on the dotted line: Villiers welcomes milestone in battle to save Trent Park