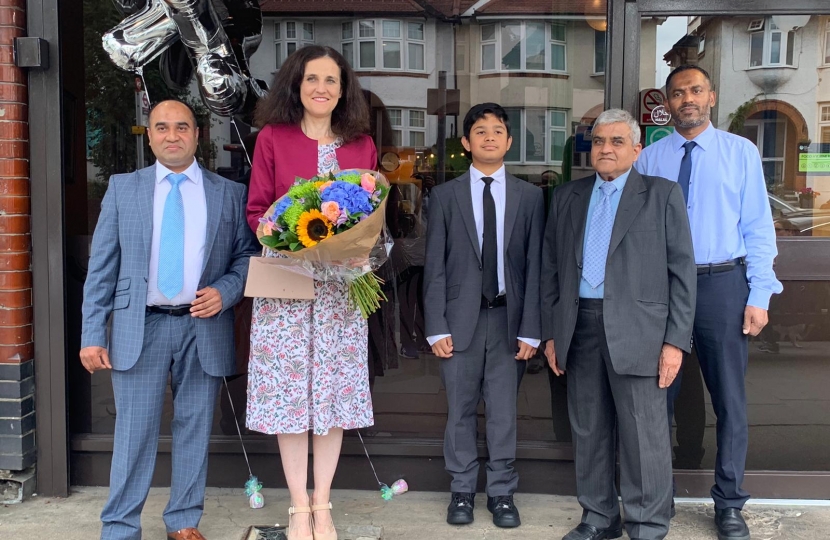 Situated in Colney Hatch Lane in Muswell Hill, at the southern end of her constituency, Theresa Villiers visited for celebrations to mark the silver anniversary of the establishment of this award-winning restaurant.

Speaking afterwards, Theresa said “It has been an honour to attend the Taste of Nawab’s 25th anniversary celebrations. It is important for any MP to keep in touch with local businesses and I am delighted to have been able to be part of this very special anniversary.”

“It was great to meet the staff of Abdul’s restaurant, and get the chance to taste their wonderful food. They all gave me a very warm welcome. I congratulated Abdul and his team for creating such a thriving and successful business.”

“I was really pleased that Syed Nahas Pasha from Curry Life Magazine was present for this very special occasion. It is great that the Taste of Nawab is recognised as such an excellent restaurant, both by my constituents in Muswell Hill and Friern Barnet, and also by the professional publications like Curry Life.”

Taste of Nawab has received accolades from organisations such as TripAdvisor, Time Out, the London Food Awards, the Asian Food Awards, and the London Curry Awards. Abdul Rahman and his staff appeared on the front page of the New York times during the Covid emergency in an article about the work that they and others did to support vulnerable people during lockdown.