Boost for Barnet High Street with launch of Teenage Market 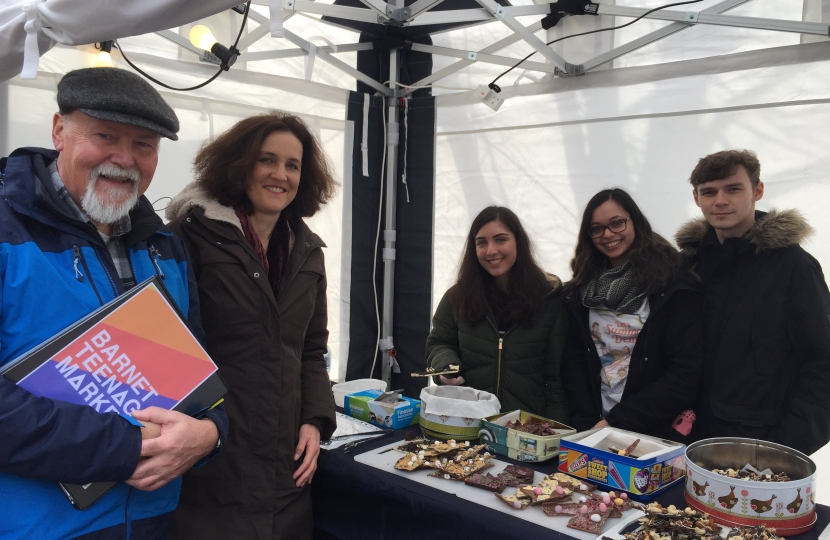 Local MP Theresa Villiers visited Barnet’s first ever Teenage Market over Easter to see how this initiative is thriving. She was part of the team which helped secure over £50,000 to get the market up and running.

The new market – taking place in the bandstand area at the back of the Spires Shopping Centre in High Barnet – is one of the first of its kind in London and provides an opportunity for young people to showcase their business ideas and musical talent.

It was set up after funding was found by Chipping Barnet Town Team – a group which Theresa belongs to - which works to support Barnet High Street and encourage people to visit the local town centre.

Theresa looked in on several stallholders, including Suzero, who are students from the University of Hertfordshire making snacks without sugar.

During her visit, Theresa also met Maud Quinton from Friern Barnet who is one of only 36 Scouts and Explorers in north London picked to go to the 24th World Scout Jamboree in America. Maud was at the market selling cakes and sweets as part of her efforts to raise £4100 to attend the Jamboree and also to help scouts in poorer countries who cannot afford the full amount.

“I am honoured to part of the Chipping Barnet Town Team who have supported this excellent initiative by securing its funding. It was great to meet young people at the market who are full of ideas, showing that they are the entrepreneurs of tomorrow,” said Theresa.

“These markets have been a success in many parts of the country, but this is one of the first in London. I think more should be set up. A key goal is to boost Barnet’s historic market, which has struggled over recent years. It was great to see so many people coming to our local town centre to visit the Teenage Market. There were many excellent musical performances and the ideas on show in the market stalls were innovative and impressive.”

“I hope as many local people as possible drop by over the next few Saturdays to look around, support the market, and also our high street. Well done to everyone who took part. Many thanks to Bob Burstow who led the efforts of the Chipping Barnet Town Team which have made all this possible. Bob has done a fantastic job in raising funds and making this project happen.”

Theresa’s visit to the first Teenage Market took place on Saturday 31st March. The event was well attended. Visitors include Cllr David Longstaff who has played an key role in setting up the new market, as chairman of the Chipping Barnet Town Team. The next Teenage Market takes place in Barnet on Saturday 5th May from 4pm to 7.30pm.