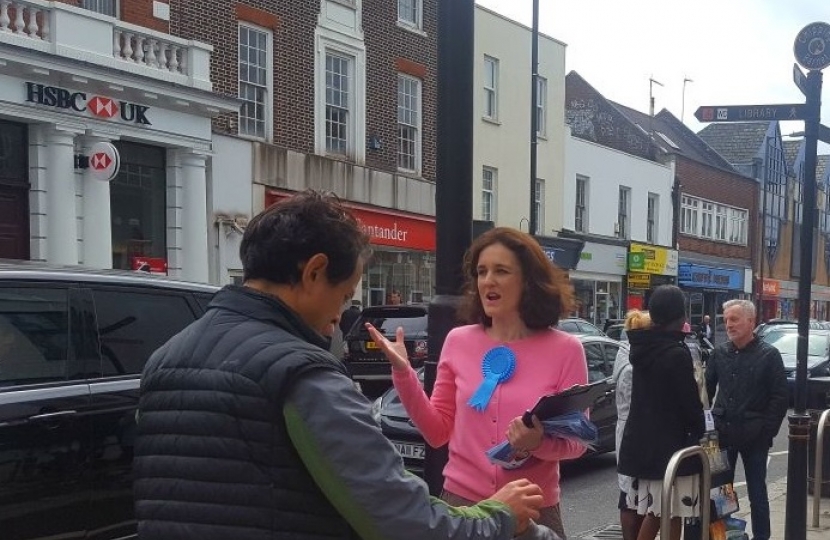 Out and about on the campaign trail, Theresa Villiers, the Conservative Parliamentary Candidate for Chipping Barnet, has been discussing a range of issues with residents. A number have emphasised how important it is to support local high streets and small businesses. Others have called for big multinationals to pay their fair share of tax. These are both important areas of campaigning for Theresa Villiers and she believes that they are linked. In the following article she sets out some of the action being taken to respond to the concerns raised by voters….

“Supporting our local high streets and town centres is a high priority for me. Earlier this year, when I heard that revaluation of shops and offices looked likely to lead to big increases in business rates I publicly called on the Chancellor of the Exchequer to think again about those plans. As a result of the concerns which I and other backbench MPs expressed, a £300m package of support was announced in the Budget to help small businesses and high streets and cap increases in business rates.

In Parliament’s weekly Prime Minister’s Question Time I called for further action to be taken to lighten the burden of tax on smaller businesses by ensuring that large multinational companies play by the same rules and pay the taxes that are due.

The Conservatives are committed to tackling tax evasion and aggressive tax avoidance so that everyone pays the right amount of tax. We have introduced a 25 per cent tax on profits generated by multinationals from economic activity here in the UK which they then artificially shift out of the country. This Diverted Profits Tax is expected to raise over £1 billion over the next 5 years.

Since 2010, HMRC has secured £140 billion in additional tax revenues (including more than £45 billion from big business) as a result of actions to tackle tax evasion, aggressive avoidance, and non-compliance. This is making a vital contribution to funding our public services and other priorities.

We have cut Corporation Tax to one of the lowest rates in the G20. Revenues from the tax have actually increased from £34 billion in 2011-12 to £50 billion this year, showing that the cut in rates has helped promote jobs and investment in the UK. We are committed to having a competitive corporate tax system, which supports investment and jobs in the UK. But we will not tolerate multinational companies treating tax as an optional extra.

Measures announced in the 2017 Budget would raise an extra £820 million by 2021. These include stopping businesses reducing their tax bill by artificially converting capital losses to trading losses; shutting down abuse of foreign pension schemes; and introducing penalties for professionals who facilitate improper tax avoidance arrangements later defeated by HMRC. We also intend to create a new criminal offence for firms who fail to stop staff facilitating tax evasion.

When they were in power, Labour did little to tackle this problem. Even worse, just a few weeks ago Jeremy Corbyn and Labour blocked Conservative measures to crackdown on £8.6 billion of aggressive tax avoidance.

At the end of a Parliament, only measures which have the support of the Opposition are likely to get through in the period known as the ‘wash-up’ before dissolution of the House of Commons and the start of the election campaign. In April, Labour used this power to force key measures to be dropped from the Government’s Finance Bill.

I find it astonishing that Labour blocked new rules to close loopholes exploited by wealthy ‘non-doms’, as well as further measures to stop companies from artificially shifting losses overseas. The Labour front bench also refused to support new fines for accountants who help their clients engage in improper transactions designed to artificially reduce their tax bills.

This very serious mistake by Labour is another illustration of why it would such a big risk to trust a weak and floundering Jeremy Corbyn with the responsibilities of Prime Minister.

If the Conservatives are re-elected, and Theresa May returns to Downing Street, we will reintroduce these measures aimed at making the tax system fairer and ensuring big businesses play by the same rules as everyone else."