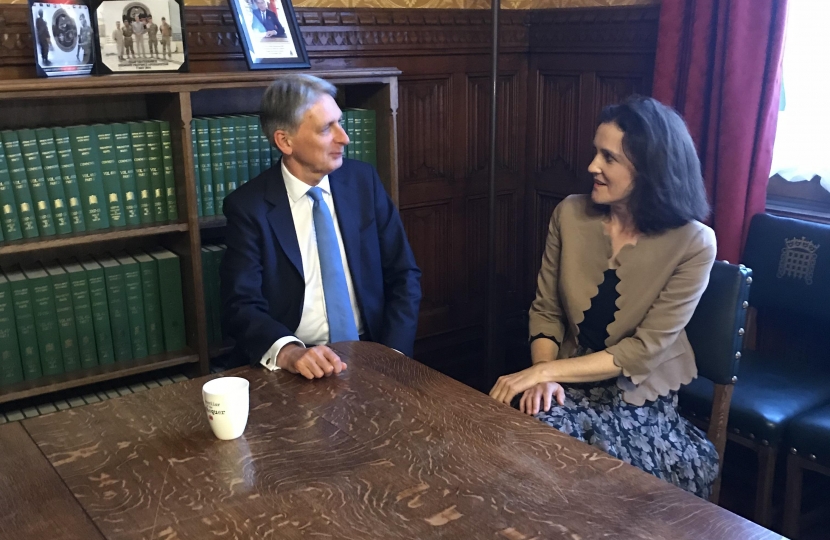 Theresa Villiers, MP for Chipping Barnet, is calling on the Chancellor to shift the burden of tax away from high street retailers and on to large digital businesses. She has written the following article in advance of a meeting in Parliament this afternoon with the Rt Hon Phillip Hammond:

"It is unfair for large multinational businesses to use aggressive and artificial tax avoidance schemes so that they hardly pay any tax in the UK at all, despite doing millions of £s worth of business here. This needs to stop so that these businesses pay their fair share of taxes.

Small businesses on our high streets are finding it tough to compete with online retailers. I want the Government to help our local high streets by shifting the burden of taxes away from independent shops paying business rates, so more of the burden is shouldered by large digital businesses such as Amazon and Facebook.

I have made this point in Parliament. I plan to raise it with the Chancellor at a meeting today to urge him to make this change in his forthcoming budget

The Conservatives take this issue very seriously. This Government and its coalition predecessor have taken more action than any previous administration to make sure big businesses pay their fair share.

A key point is that we cannot fix this problem in a comprehensive way without global action involving tax authorities in many parts of the world. When he was Prime Minister, David Cameron was the first leader to put this issue firmly at the top of the international agenda when he made it a centrepiece of the UK’s G8 Presidency in 2013.

The 2013 G8 summit in Fermanagh, which I was involved in as Secretary of State for Northern Ireland, was a turning point. Since then, the UK Government has led international efforts to reform the international rules around where profit is made and where it should be taxed. Extensive technical work is now making progress in the OECD and G20.

Pending this global reform, the Government has taken action by introducing a diverted profits tax. Set at a rate of 25 per cent, this is levied on multinationals which artificially divert profits out of the UK. Around £8 billion has been returned to the Exchequer through a series of other measures to crack down on aggressive tax avoidance schemes by international businesses

I was successful in campaigning for help for high street retailers in last year when the Chancellor announced a substantial package of support in relation to business rates. I will continue to work to support the local town centres in my constituency because of the crucial role they play in community life."