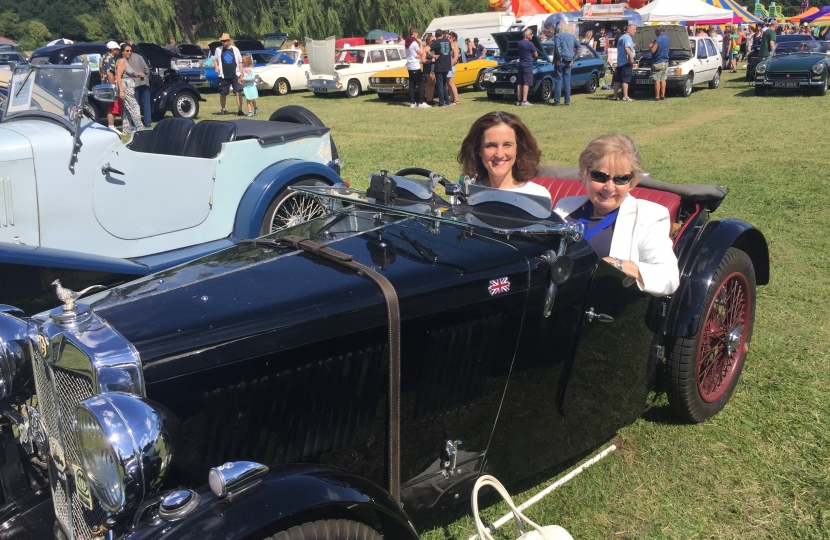 Theresa Villiers MP joined big crowds in the sunshine at the 23rd annual East Barnet festival in Oak Hill Park this weekend. The festival has been going since 1995 and is run by a team of volunteers. Activities at this year’s festival included a funfair, live music, and 120 stalls. The festival is entirely free to attend and lasts for three days, with live performances from groups such as Rikud Israeli Folk Dance, young bands from Finchley Music Centre, The Big Choir, East Barnet Music Centre and many others.

At the festival Theresa met representatives from a number of local groups including Friends in Need (FIN), an East Barnet charity that provides activities and support for the elderly; North London Friends of Israel; and the local St John Ambulance Group. Theresa walked round the festival with Barnet’s Deputy Mayor, Mill Hill representative Cllr Val Duschinsky and her husband Peter, who judged the Classic Car competition (pictured).

Theresa Villiers said: “The East Barnet festival is one of the highlights of the summer and it is going from strength to strength. I was delighted to attend and chat to residents, and see the incredible amount of effort that goes into such a fantastic day out for everyone. The huge amount of voluntary work that goes on behind the scenes throughout Barnet is always incredibly impressive. Events like the East Barnet festival really showcase the commitment of so many local people prepared to give their time to support worthwhile activities and events in the community. I’ve been attending the festival for around 13 years and look forward to being back next year.”

John Wilkes, director of FIN, said: “The festival is always brilliant and great to get the community together. We raised £207 in just three hours.”

Anne-Marie Pearce, one of the festival organisers, said: “It was another outstanding festival. We had a captive audience all the time in the dance tent with the young artists who were outstanding, one of the most successful events in many a year. We are so lucky to have such wonderful talent here in Barnet. It was lovely to see Theresa and Val and I would like to thank all the residents from in Barnet and beyond who came to support.”