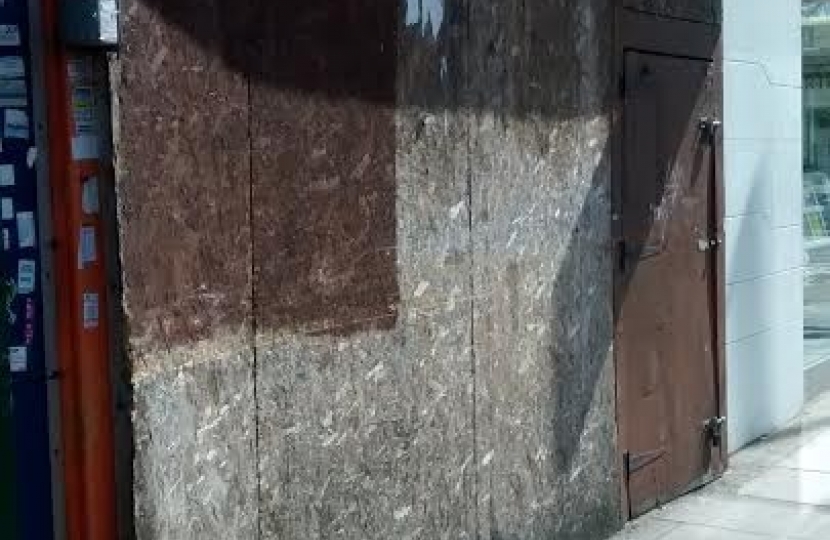 The Barnet branch of Foxtons, the prestigious estate agent and property management firm, are currently facing prosecution by Barnet Council for allowing their shopfront in High Barnet to fall into disrepair and then failing to comply with Council notices to improve it.

In April 2016, on behalf of the Town Team, Theresa approached Barnet Council regarding the boarded-up shop. Thanks to this, the owners were served with a notice under Section 215 of the Town and County Planning Act, which allows local authorities to take steps requiring land to be cleaned up when its condition adversely affects the amenity of the area.

Foxtons had originally planned to appeal the notice, but then agreed with the Council that they would instead take interim steps to improve the appearance of the shopfront. This was in September 2016.

In February 2017, with no visible improvements having taken place, Theresa took the case back to the Council. The Council then confirmed that the next step would be to prosecute the owners for non-compliance with the notice. The Council are now working with solicitors to prepare their case.

Theresa Villiers said: “The site at no. 100 High Street is an eyesore that detracts from all the shops in the area. Owners of vacant sites do have a responsibility for basic upkeep for the benefit of those trying to trade in the area. Frequently, the problem is that the vacant shopfronts are owned by distant landlords with no interest in the area, but no. 100 is owned by Foxtons, a London firm that operates from the site next door.

“Foxtons have had nearly a year to clean up the shop front and have so far done nothing. They are a property management firm and it is embarrassing that the Council have had to begin proceedings for prosecution to get them to manage their own shopfront.”