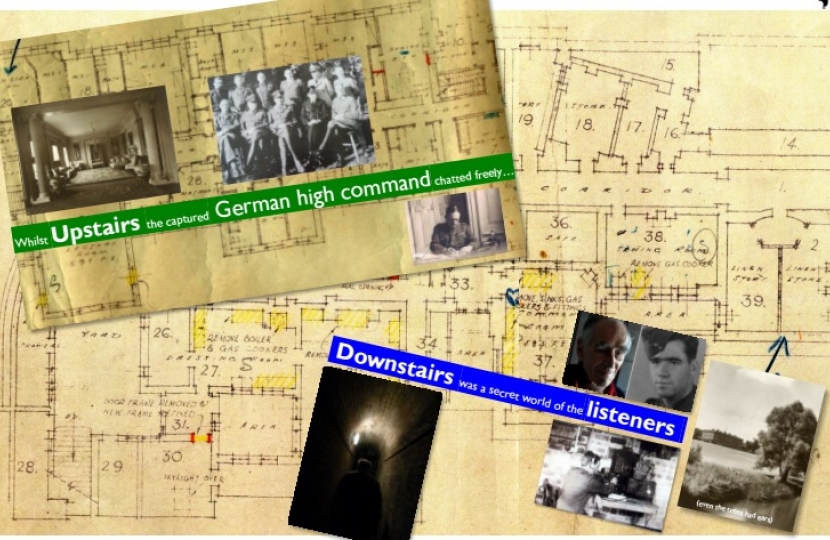 Theresa Villiers, MP for Chipping Barnet, has welcomed the next step in the campaign to see a museum established in the historic house in Trent Park in Enfield. On the 23rd August, Ms Villiers and Enfield councillor, Jason Charalambous, held a productive meeting with Berkeley Homes, the new owners of the former Middlesex University site in the park. She and Cllr Charalambous have been campaigning for some time for the park’s historical significance to be recognised in any new development.

The meeting took place at Ms Villiers’ constituency office in High Barnet and established that Berkeley would support a museum being set up in Trent Park House as a fitting tribute to its long history, including its significant role in World War Two. The house was used to house senior German prisoners of war. Valuable information helping the war effort was obtained by bugging their accommodation and listening into their conversations.

Ms Villiers and Cllr Charalambous were shown plans that confirmed that the public will be granted access to the most historically significant areas of the mansion house for the first time, with the establishment of a museum and a cafe. Berkeley proposes to restore the mansion, build 257 new family homes, and reinstate a number of the design features of the park which have been lost in previous decades.

Until 2012, this part of Trent Country Park formed part of the campus of Middlesex University. Poorly designed buildings were added in the 60s and 70s and a number of historic features were left unrestored and inaccessible to the public.  The site was bought by Berkeley Homes in 2015, and the public consultation which was then carried out identified six key visions for the site: refurbishing Trent Park House; opening the house for public access, including a museum; restoring the park; providing public access to the park; restoring other historic buildings on the site; and securing the long-term future of the site through building new homes based on the previously developed footprint of the college buildings.

Theresa Villiers has been a longstanding supporter of the campaign to restore Trent Park House. Earlier this year, she took the case to Enfield Council, Historic England and to the then-Culture Minister Ed Vaizey, arguing that planning permission should not be granted for any development unless the historical significance of Trent Park House was recognised in the proposed development. Alongside with Cllr Charalambous, Ms Villiers encouraged her constituents to sign a petition calling for the establishment of a museum.

Following the meeting, Theresa Villiers said: “This is good news, and a positive step forward in the long-running campaign to protect and enhance the former Middlesex University site in Trent Park. Berkeley have listened to many of the comments made by the public. I am especially pleased that the grounds will remain open for public access and that the historical significance of Trent Park House will recognised.”

“Trent Country Park is a great asset to the area, and I hope the planned museum and café will enhance the facilities it provides to families from across Barnet and Enfield. There is still some important questions to be settled on how the museum will be established and operated and also regarding traffic issues related to the housing development; but the proposals are definitely heading in the right direction.”

Cllr Jason Charalambous said: "Whilst discussions are still ongoing with Berkeley Homes on the nature, size and scope of the proposed museum, I am hopeful that by the time they submit a planning application for the redevelopment of the site we would have reached the best possible agreement for a museum and learning centre which will be a tremendous asset for the local area and be of national significance.

The Trent Park Museum Trust is being established to oversee the delivery and operation of the museum, and I am very grateful to all those who have supported us so far - including Theresa who has supported by this campaign from day one.

There is still some way to go, but the gap between Berkeley's vision and ours is narrowing, and once a deal is agreed, and pending a successful planning application, the work of raising funds and building a museum can begin.”

The Planning Application is expected to be submitted in early September.