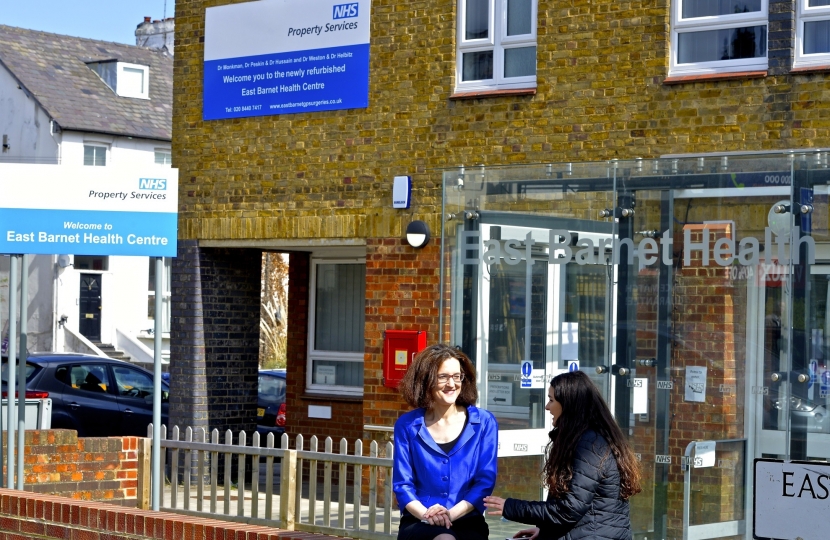 Supporting our NHS is a top priority for Theresa Villiers. Ever since becoming MP for Chipping Barnet, she has been working to secure the best NHS services for the area. Her campaigns include:

Campaigning for NHS services for Barnet and supporting our local hospital

Theresa successfully campaigned to prevent services in Barnet Hospital from being scaled back in any of the health reconfigurations proposed by the previous Labour Government. She helped secure the expansion of A&E and maternity services at the hospital. The 2010-2015 Conservative-led coalition saw maternity, children's and A&E services expand at Barnet Hospital with major new facilities opened. Theresa lobbied throughout to support Barnet Hospital, questioning the chair of Barnet and Chase Farm Hospitals Trust to make sure that Barnet A&E would be prepared for extra patients after changes to nearby urgent care and A&E services.

As MP, she worked with local health chiefs to emphasise the importance of a joined-up approach between the hospital, GPs, the local authority, and people running care homes.

Theresa is very much aware of people's concerns about the time it can take to get to see their local GP. She has been campaigning for an expansion of GP appointments in Barnet. She raised this in Parliament in Prime Minister's Questions and with successive Secretaries of State for Health. She has welcomed progress on this campaign with the recent statement by the Health Secretary that the Conservatives will deliver 50 million more GP appointments.

November 2019: Backing the NHS in Barnet with more GP appointments

April 2019: Theresa gets stuck in to help local GPs

March 2018: Villiers welcomes success for petition to save breastfeeding service in Barnet

April 2015: Championing the NHS in Barnet

May 2010: Villiers welcomes decision to scrap plans to downgrade A&E services in Barnet

Just before Christmas 2013, Theresa was successful in her three-year campaign to get Brunswick Park Health Centre rebuilt and reopened after it was damaged in a fire. The centre stood empty for many months with local GPs unable to agree rental terms with the NHS. Theresa got the two sides round the table for a series of meetings and eventually an agreement was reached.

April 2013: Villiers keeps up the pressure to get Brunswick Park Health Centre up and running

East Barnet Health Centre (EBHC) was temporarily closed in 2014 for the removal of asbestos and its services relocated to Vale Drive in High Barnet. This was only supposed to be for a few weeks, but the closure stretched into months. Meanwhile, patients and GPs were becoming increasingly fed up with problems at Vale Drive. Theresa took action by bringing all the key people together for a meeting in her constituency office - NHS Property Services (NHSPS), the GPs, NHS Barnet and representatives of residents. NHSPS agreed that the centre would be fully refurbished and it was finally re-opened in October 2015.

Theresa continued to press for updates as services connected to the baby clinic remained at their temporary home in Vale Drive: an awkward journey for young parents or carers trying to take a child on public transport. She made further representations to the NHS and was informed in early December that the relevant authority had signed the agreement for re-occupation, followed by the clinic eventually re-opening in January 2017.

January 2017: East Barnet baby clinic to be back in action!

In 2015, The Royal Free Foundation Trust (which includes Chase Farm Hospital), submitted an outline planning application to Enfield Council for a new hospital building of up to 32,000 sq metres, as well as new homes and a three-form entry primary school.  Theresa urged Enfield Council to approve the outline planning application, encouraged her constituents to do the same, and lobbied the government to support and contribute towards the major programme of improvements. The final approval was given by the Treasury and the Department of Health in 2016 for a multi-million revamp that would improve services for Chase Farm patients, many of whom are Barnet residents.

The brand new high-tech hospital was formally opened earlier this year and has proved to be very popular with patients.

May 2019: Villiers welcomes formal opening of the new Chase Farm Hospital by HRH the Duke of York

Following a cross-party campaign supported by Theresa Villiers MP, the drug Kadcyla will be made available by NHS England to people suffering from secondary breast cancer. Theresa had backed Breast Cancer Now’s campaign to make the life-prolonging drug, Kadcyla, available for routine use through the NHS, speaking up in Parliament and taking the case to the Secretary of State for Health.

She also backed the Shoulder To Shoulder campaign by Cancer Research UK to improve early diagnosis of cancer and get more specialists cancer staff appointed to the NHS.

Survey on NHS services and the Covid emergency