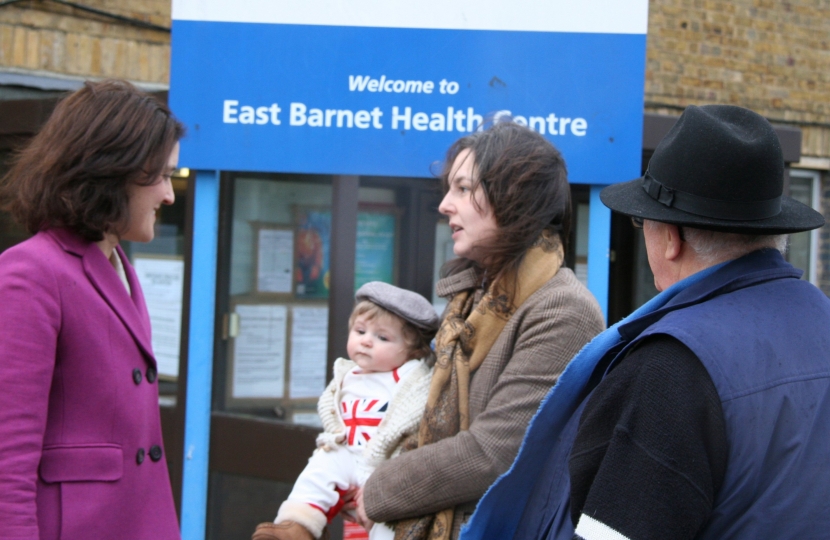 Theresa Villiers, Conservative Parliamentary candidate for Chipping Barnet, has been supporting the campaign to re-open East Barnet Health Centre (EBHC). It was closed for asbestos removal last spring and was expected to re-open after a few weeks. When the asbestos problem turned out to be more serious than expected, the closure dragged on.

Theresa took up the concerns of local residents and urged the NHS to get the centre re-opened. She has recently provided the following update to Barnet Council on progress made in the campaign.

The latest news is that clear out work to prepare for refurbishment of the health centre started there last week.

"Many residents have contacted me expressing their serious concern about the continuing closure of East Barnet Health Centre. On 13th February I held a meeting on my constituency office with NHS Property Services (NHSPS) and Barnet CCG, along with representatives of the GP practice based at EBHC and their patients, Helen Pryce and Jennifer Grocock.

I emphasised to NHS Property Services, as did the residents, that the situation was unacceptable, and that East Barnet Health Centre needed to re-open as soon as possible. NHS Property Services confirmed that they are to carry out a full refurbishment of the health centre. They announced that they planned to start the work by the end of March, and hoped that the centre would re-open by the end of September or early October. Funding of £970,000 has been secured, and most of the work needed to appoint contractors has been completed.

The residents and I pressed for urgent improvements to be made to the temporary arrangements at Vale Drive. In particular, patients were finding it very hard to get through to the surgery on the phone. They were also having difficulties with parking and travel to Vale Drive. Concern was expressed that some elderly patients were apparently choosing not to seek medical help when they need it because they are unwilling to travel to Vale Drive.

I emphasised the importance of getting agreement between NHSPS and the GPs as soon as possible regarding a new lease and terms of occupation at the refurbished facilities. NHSPS need to ensure the problems which occurred with Brunswick Park health centre are not repeated, where reopening was delayed for many months because NHSPS and local GPs found it difficult to agree a new lease.

Assurances were also given by NHSPS on the safety of health records stored at East Barnet Health Centre. The building is protected by 24 hour security.

Since the meeting, I have been in very contact with NHSPS and BT (at times I have been ringing them on an almost daily basis) to try to get the problems with the Vale Drive phone systems resolved. NHSPS have informed me that the work has been completed and the upgraded phone system is now operational.

I have pressed NHSPS and the GPs to give urgent priority to discussions of the documentation which they need to agree regarding the refurbished health centre (eg the specification for the refurbishment work and a new lease). I gather a constructive and positive meeting has recently taken place between the GPs and NHSPS.

NHSPS have informed me that preparatory work started at EBHC last week. They hope to engage contractors very soon to start the full refurbishment, but this is dependent on sufficient progress on agreement on relevant documentation with the GPs.I will keep the pressure up until the refurbishment is delivered and the centre is open once again."