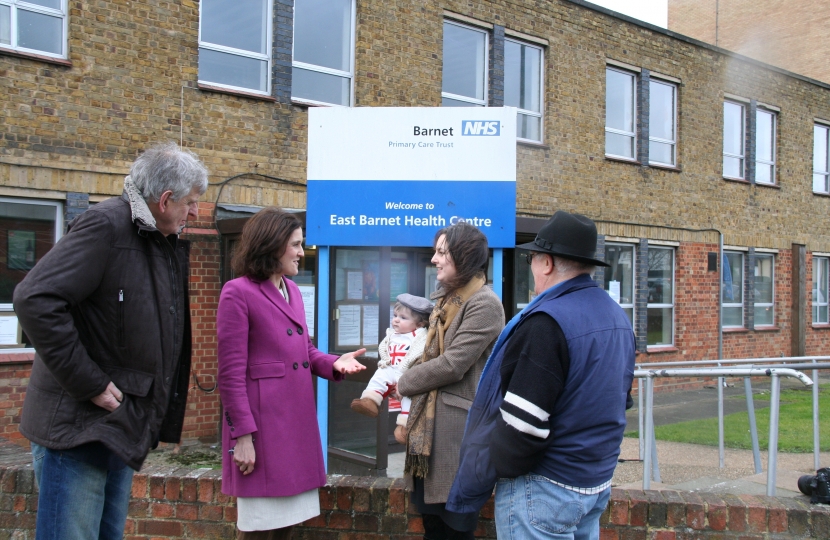 Theresa Villiers, Conservative Candidate for Chipping Barnet, continues to push NHS Property Services (NHSPS) to keep them on track to get East Barnet Health centre reopened. The latest news is that the refurbishment works are well underway and NHSPS still expect them to be completed on time for the end of September or early October.

Theresa has also been pressing NHSPS to deliver on their promise to put on a shuttle bus from East Barnet Health Centre to the GPs’ temporary location at Vale Drive. A purchase order has been made for a bus and a procurement process is underway. The six seater bus will have space for wheelchairs and buggies and NHSPS hope it will be operating very soon. It is expected to run roughly every 15 minutes in a loop all day between East Barnet and Vale Drive health centres. There will be no charge for patients who use it.

Theresa said “I will continue to do all I can to get East Barnet Health Centre reopened as soon as possible. The next step is to ensure that the paperwork is agreed between NHSPS and the GPs regarding the terms on which they will use the newly refurbished centre. This was what held up the re-opening of Brunswick Park Health Centre and no one want to see this repeated. Residents have already been kept waiting for too long for East Barnet health centre to re-open. I completely understand their frustration at what has happened and I pay tribute to the successful campaign run by residents on this issue which I will continue to give my full backing.”

Theresa first took up the concerns of local residents about East Barnet health centre some months ago. The centre shut in the spring last year for asbestos removal. It was expected to reopen just a few weeks later but the closure dragged on. Patients had to see their GPs at Vale Drive health centre instead which was causing serious problems. Many patients were finding it hard to travel to Vale Drive because of very limited parking. Also the phone systems at Vale Drive could not cope with increased call volumes and patients often could not get through to the surgery.

In February Theresa held a meeting at her constituency office with NHSPS, the East Barnet GPs, and representatives of residents. This really helped get things moving. Theresa and the residents told NHSPS that the situation was unacceptable and NHPS agreed to carry out a full refurbishment of the centre, with a 120 day period for carrying out the work, aiming to start at the beginning of April and finish by early October. They confirmed that funding of £970,000 had been secured for the work. They also promised to upgrade the phone system at Vale Drive and put on a shuttle bus to Vale Drive.

Following the meeting Theresa kept in constant contact with NHSPS and BT to get the refurbishment work started and the improvements to Vale Drive phones delivered. This finally happened a few weeks ago.