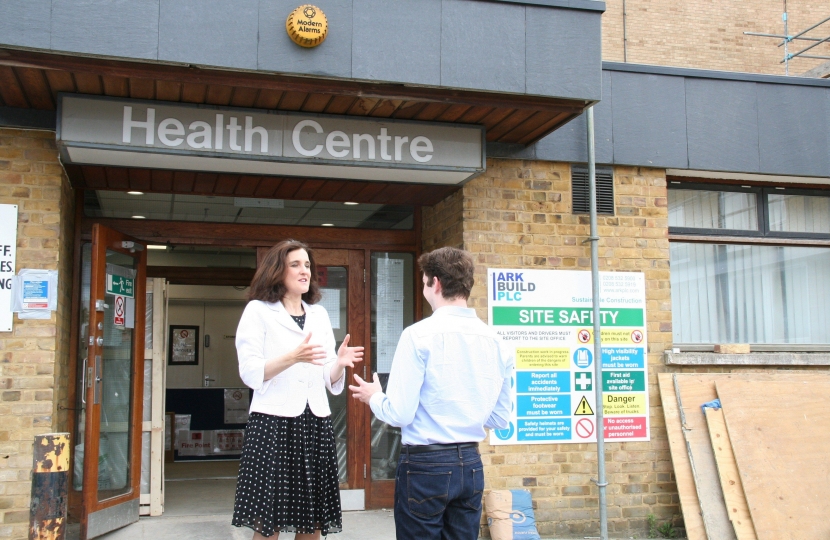 Theresa Villiers, MP for Chipping Barnet, has stepped up her campaign to get East Barnet Health Centre reopened on time when refurbishment works are completed at the end of the month. She has been in contact with both NHS Property Services (NHSPS) and the East Barnet GPs to urge them to keep working towards the early October date for reopening which has been planned since February. She was alarmed to hear that progress on agreeing new legal documentation needed to cover the GPs’ occupancy of the newly refurbished health centre had stalled.

Commenting on the situation, Theresa Villiers said, “Ever since NHS Property Services agreed to refurbish East Barnet Health Centre, I have been pressing them and the East Barnet GPs to agree the lease documentation needed to enable the GPs to move back to the centre. Delay in getting this kind of documentation resolved was what held up the reopening of Brunswick Park Health Centre for months. We all wanted to avoid the same thing happening again.”

“I was alarmed to learn that meetings between NHSPS and the GPs to sort out this paperwork had stopped, pending the outcome of national negotiations between the BMA and the NHS.”

“I urged both sides to get back round the table and try to agree terms. Even if there are issues which cannot be resolved until the national negotiations conclude, surely some agreement in principle could be reached on other key matters?”

“I appreciate that both NHSPS and the GPs have interests to protect – the GPs have a business to run and want to keep running costs down and NHSPS have to obtain a proper rent reflecting the improvements made to the health centre funded by the taxpayer. But it would be a great pity if delayed paperwork meant patients were shut out of East Barnet Health Centre despite the completion of refurbishment work in just a few weeks time. There is no guarantee as to when the BMA will finish its national negotiations so if this really is a block on reopening the health centre, it could be shut for many months.”

“I welcome recent assurances I have had from both the GPs and NHSPS that they will engage in discussions to try find a way forward. I will continue to urge them to reach agreement on enough key issues to enable the GPs to move back to the new health centre, putting an end to the inconvenience for patients having to travel to temporary facilities in Vale Drive.”