Championing the NHS in Barnet 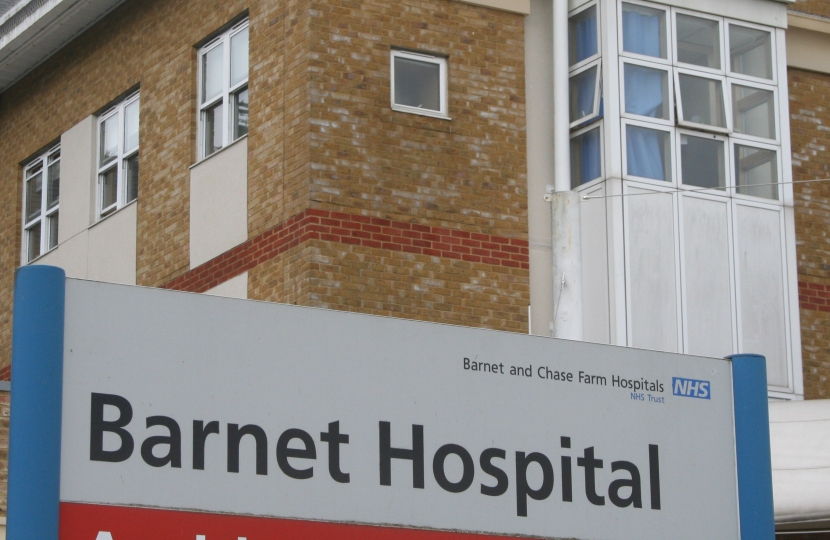 As general election day gets closer, Theresa Villiers, Conservative Parliamentary Candidate for Chipping Barnet has posted the following article setting out her views on key issues relating to the NHS.

I am a strong supporter of the NHS. I successfully campaigned for a major expansion of maternity, children’s and A&E services at Barnet Hospital. I also worked hard to get Brunswick Park Health Centre re-opened and I am doing the same for East Barnet Health Centre. I am backing plans for a £275 million rebuild of Chase Farm Hospital which has been secured under this Conservative-led Government which will deliver greatly improved services and facilities for patients. If I am re-elected, I will continue to campaign for the best NHS services for my constituents.

Funding the NHS’s plan for the next five years

I am committed to properly funding the NHS as is the Conservative Party. Spending per year on the NHS is now around £7 billion higher in real terms than it was when we took office in 2010. The Prime Minister has announced that by 2020 a Conservative Government will be delivering at least £8 billion more funding per year in real terms for the NHS. This will enable the NHS to deliver its Five Year Forward View plan. Only a Conservative Government can deliver the NHS’s vision of a better health service.

You can only have a strong NHS with a strong economy. When the Conservatives took office as part of the Coalition Government, we took two big strategic decisions about the health service: to increase funding; and cut bureaucracy. We have only been able to invest in our NHS because we have a growing economy to pay for it and we have been prepared to take difficult decisions in other areas of spending. Without a long-term plan for the economy, you can’t have a plan for the future of the NHS. Many countries which have not tackled their deficit have had to cut spending on healthcare. For example there have been cuts of 17% in Portugal and 14% in Greece.

The UK has recently been ranked as having the top health system in the world by the Commonwealth Fund. I want to pay a warm tribute to all the staff of NHS England who have ensured that our health service has continued to perform so well even under the pressure of steadily increasing demand. Some key statistics about the NHS and the record of the Conservatives in Government since 2010 include:

I am committed to an NHS that is free at the point of use, regardless of the ability to pay, and so is David Cameron and the Conservative Party. The Government has not been privatising the NHS and any suggestion that it has been doing so is not true. The NHS is something to be valued, protected and improved.

While charities, social enterprises and other providers of healthcare, such as Macmillan nurses, continue to play an important role, the use of private providers represents only six per cent of the NHS's total budget. This is an increase of only around one per cent since 2010. Spending on private providers for general and acute secondary care increased by twice as much under Labour as it has done under the coalition.

The current rules allow local NHS decision-makers the option to use independent providers (whether charitable or private sector) for certain services in certain limited circumstances, but that choice has to be made on the basis of rules and regulations which are transparent and fair and do not give special advantages to the private sector. Our Health and Social Care Act means that ministers cannot interfere to artificially drive up private sector involvement in the NHS as they did under Labour. Labour were prepared to pay private sector providers 11% more than NHS providers, but we have made this illegal.

Labour’s scaremongering about privatisation has been discredited by just about every independent expert, including by the King’s Fund as a “myth” and Labour’s claims as “exaggerated”. Labour don’t have a credible long term plan for the economy, putting the whole NHS budget at risk. Labour’s health plan has been criticised by a succession of senior Labour figures like Ara Darzi and Alan Milburn. Ed Miliband's attempt to “weaponise” the NHS for political purposes is both cynical and worrying.